Home Home Page Features REVIEW: We Were Lawless – ‘Bring Out Your Dead’ EP 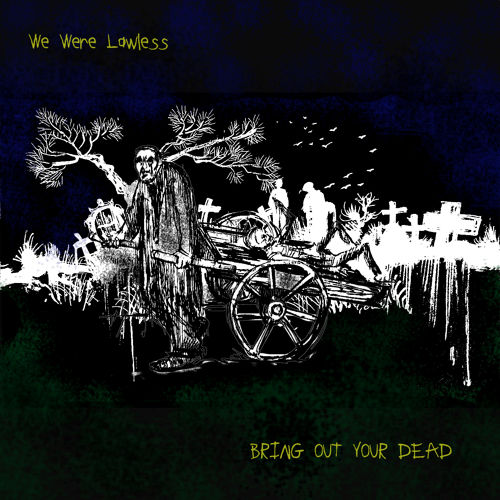 Bring Out Your Dead is the latest EP from We Were Lawless, a four-piece rock band from Todmorden who play, in their words, ‘Gutter Blues’. Recorded in their home town this April, these four tracks are the first to feature lead guitarist Sébastien Jean Degorce since he joined singer/guitarist Steve Cullen, bassist Jon Betz, and drummer Dave Foulger at the end of last year.

The first track Darkness opens with a Clash-like dub bass line that’s swiftly joined by a raw punky two-chord riff that underpins the track. Cullen’s gruff vocals are undoubtedly a key feature of the band and that’s made obvious when his unholy mixture of Tom Waits’ gravel-throated rasp and Mark Lanegan’s deep croon looms large on the track. Degorce’s spidery and melodic guitar-work on this track and throughout the EP also calls to mind that of a long-time Waits collaborator, Marc Ribot. A dark tale of the effects of poverty, second track Austerity starts with a twanging indie rock riff not unlike the Arctic Monkeys, albeit heavily sedated. The chorus talks of Austerity, portrayed here as a Grim Reaper style character, visiting upon her unfortunate victims. Unfortunately, what seems like an over-reliance on Cullen’s voice to carry the songs means that the band’s music can sometimes seem a bit anaemic, whereas a bigger and beefier sound would seem to work better with the growling vocals. That bigger sound is present in the third track Hard Reign which kicks in with Josh Homme-like guitar, the crunchy distorted riff propelled along by rumbling bass and drums to a satisfying, shouty chorus. It’s got live favourite written all over it. The last track, Bag Of Chains is a marked departure from the band’s usual sound. The tribal drums and ominous bassline are reminiscent of Joy Division or early Therapy? Steve Cullen’s voice is given plenty of space here and he takes full advantage, from the almost whispered verse in which he talks of having ‘no salvation’ and being ‘riddled in sin’ to the ghostly howl of the chorus. The guitar here remains an eerie presence in the background, all wailing feedback and screaming single notes.

You can hear Bring Out Your Dead here:

or on their Reverbnation page: http://www.reverbnation.com/wewerelawless

Overall, this EP is a good introduction to a band who have already garnered a great reputation as a live act. You can find this out for yourself at The Blind Pig in Sowerby Bridge on Friday 5th June, and at Jump WMC in Barnsley on Sunday 28th June. These dates and more can be found on the band’s Facebook page: https://www.facebook.com/lawlessbanned