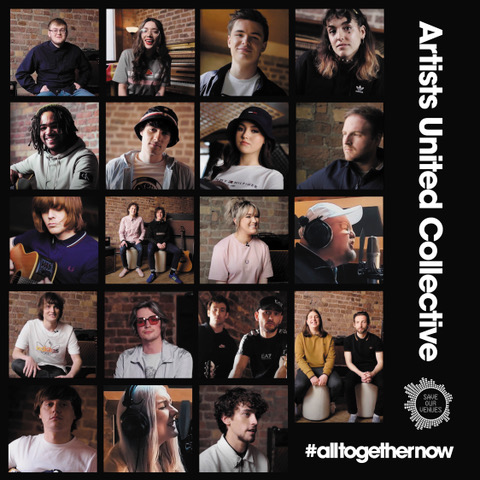 It was always music or football for street kids aiming high and now, as the fabric of music in the UK remains under threat, new mega-group, ARTISTS UNITED COLLECTIVE, featuring artists such as Zuzu, Trampolene and The Crooks stamp their collective feet with a collaborative, fundraising cover of The Farm’s 1991 hit, All Together Now. Released this week, just a fortnight before Turkey and Italy kick off the delayed Euro 2021 competition in Rome, artists and organisers hope the emotive cover finds the passion of the terraces and raises vital funds for the UK’s suffering live venue community.

Woven indelibly into the fabric of UK chart-indie, the emotionally-charged All Together Now was originally released in November 1990, drawn from the Liverpool six-piece’s chart-topping album, Spartacus and reached No.4 in the UK Singles Chart. The new version, also featuring the first artist to hit the top of the UK Folk Chart and Liverpool storyteller, Jamie Webster alongside indie rabble-rousers Rats, The Royston Club and Shambolics, was specially recorded at a time of rising optimism that the nation’s live music venues could be open and on their way to recovery by autumn 2021. Each artist has pledged their time and energies to raise money for the survival of an industry that has given them their voices.

Stating that there are 556 venues at risk of closure, the Music Venues Trust launched the #saveourvenues campaign to draw together fundraising initiatives undertaken by artists and music fans who heard the call of grassroots venues closed by the Covid pandemic. UNITED ARTISTS COLLECTIVE is the latest gathering of musical minds to raise money for venues and venue staff and maintain public awareness that the UK’s bright summer will likely see most of the nation’s vital music venues stay dark.

Pulling together the artists, managers, labels and more of the 18 featured artists, also including The Lathums and rising stars Lottery Winners, Rianne Downey and Nikki & The Waves, the ARTISTS UNITED COLLECTIVE PROJECT has been initiated and produced by a partnership of fashion brand and music event sponsors, Scott’s Menswear, promoters This Feeling, Liverpool-based label and management company, Modern Sky UK and Rich Turvey of Parr Street Studios, Liverpool who took up duties behind the mixing desk.

Paul Ramsdale of Scott’s Menswear said of the initiative: “Our iconic small venues not only provide the path for artists on their way to greatness, but provide a sense of pride, community and celebration of both the local and national music scenes. ‘All Together Now’ being sung by exciting, new talent at a time when we’re emerging from a long period of lockdown should inspire us all to dig deep to make sure those venues are still around, whilst celebrating a long summer of festivals, football and renewed togetherness.”

Dave Pichilingi, CEO of Modern Sky UK, added: “We’ve so much music talent around the UK and, simply, they will have nowhere to grow if we lose live venues. It’s a battle that we’re very much in together, so recording a new version of ‘All Together Now’ with some of the artists that have come through, and still love playing our at-risk venues made perfect sense. This summer brings hope in music, football, vaccines, festivals and sunshine and this anthem fits that sense of optimism.”

Witnessing the latest version of his song go out into the world, The Farm’s Peter Hooton added his support, saying: “Good luck with the release I hope it raises lots of money for the Music Venues Trust, which is the lifeblood of the music industry.”

The single is the fourth occasion on which All Together Now has been repurposed to coincide with a major football tournament, with the Everton FA Cup Final team recording a version ahead of their 1995 Wembley appearance, England’s official Euro 2004 song being a reworking with DJ Spoony and a lesser-heard rarity recorded with World Cup 2006 mascot Goleo VI and Atomic Kitten celebrating that tournament with a mainland Europe-only release.

Released digitally via Modern Sky UK, all profits from the digital downloads, streaming revenues and associated merchandise of the ARTISTS UNITED COLLECTIVE will go direct to the Music Venues Trust. For more information on the #saveourvenues campaign visit: https://saveourvenues.co.uk/#/