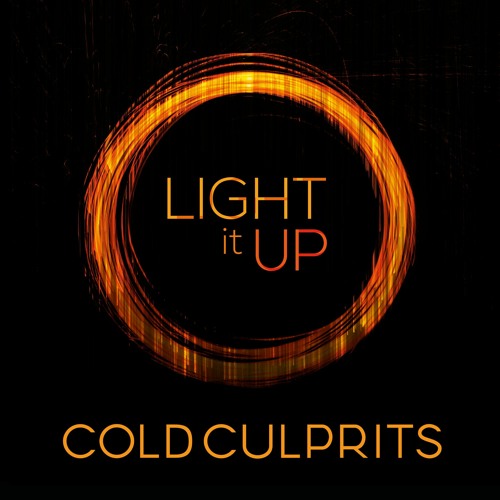 One of the good things about Cold Culprits is that you never quite know what Andy is going to come up with. Switching it up is his thing, so to speak.

For ‘Light It Up’ he has gone full on angry raw gritty rock. Guitars roar, screech, that sort of thing. Wildly outrageous guitar breaks, riffs that pound into your head like hammers. It’s a bloody riot, heavy as hell.

This is a song about something, expressed in hard hitting words. “Light It Up is a wounded, paranoid anthem to internal confusion,” says Andy. “It’s all about making sense of a chaotic, uncontrollable world and trying to find your place in it. It’s packed with frustration, but then it’s also about thinking ‘what the hell’, and exploding your life into new areas and experiences.”

But another of the things that says ‘this is Cold Culprits track’ is here in spades, that sneery NYC punk vocal of his is taken to the edge and beyond on this track; becoming an angry aggressive frustrated scream. Lovely stuff.

In all this hard heavy sound there are the other things that say ‘Cold Culprits’. The contrast of bass driven dropout with the dense dense sound. The careful layering of meticulously made sounds for maximum impact. And even though you know it’s been carefully constructed by Andy recording each layer of sound, the track has a live band feel.

What I’m hearing in this track is his exploration of bands like Led Zeppelin, Stone Temple Pilots, System of a Down and Pearl Jam; the driving bass and drums with the out there guitar.

This, people, is a bloody joy. Play loud as you dare and wig out.

“I started writing and recording Light It Up as soon as I’d finished my last tune, Renegade Days, back in June” says Andy, “but then work really started piling in on me – which was great, as I’m self-employed and I’d been through a bit of a drought, similar to many. Anyway, now I’m back on it.”

Cold Culprits isn’t a band, it’s the creative outlet for Yorkshire-based Andy Watson, a musician and freelance copywriter living on the outskirts of York.

When Andy was a child, he found an old cassette tape in the street and took it home to play on his dad’s tape player. The music on it blew his tiny head off and built the foundations of his musical tastes. It was years before he discovered that the band was The Skids.

Andy has been bashing around on guitars forever, but only started to write songs a couple of years ago. In summer 2019, the band he was in stopped making original music in favour of playing indie rock covers on the local pub circuit. This propelled Andy towards learning the drums and keyboards to complement his vocals and guitar, so he could focus on creating original music as Cold Culprits.

Cold Culprits is a sideways nod to The Germs, a 1970s LA punk rock band. It’s connected to germs being the culprits behind the common cold. The Germs were unstable, self-destructive and incoherent. They also wrote some beautifully poetic lyrics in the few short years before they imploded.