I reviewed Dead Extras’ release ‘Second Rate Sinner’ back in November last year, and that was a fucking fantastic thing.So I was looking forward to my first listen to ‘Losing Streak’, was I disappointed, hell no.

Look this thing is frantic, it’s shit off a shovel fast, however misleading the rather lovely piano intro is. The guitar on this song is so fast you can feel your fingers begin to bleed in sympathy. There are points where you actually wonder whether it’s physically possible to play that fast.

And if it was just that mad fast riffing (I say just…) it would be incredible but it isn’t, there’s light and shade. I say light, what I mean is slower riffing bits, that just get you ready for the thrill of the next lightning fast guitar runs.

And the vocals – the vocals are on the edge of throat destroying punky shouting.

Sound wise it’s that Dead Extras’ mix of punk and heavy alternative rock. To me this is the spirit of NWoBHM (but that’s just showing my age), mixing that punk thing into metal. Whatever you decide to call it, however you describe it, this is one fucking shit hot track.

This and ‘Second Rate Sinner’ have me sitting on the edge of my seat, holding my breath until the EP is out. Until then you have this to keep you going, this is absolutely incredible. Get on it now people. 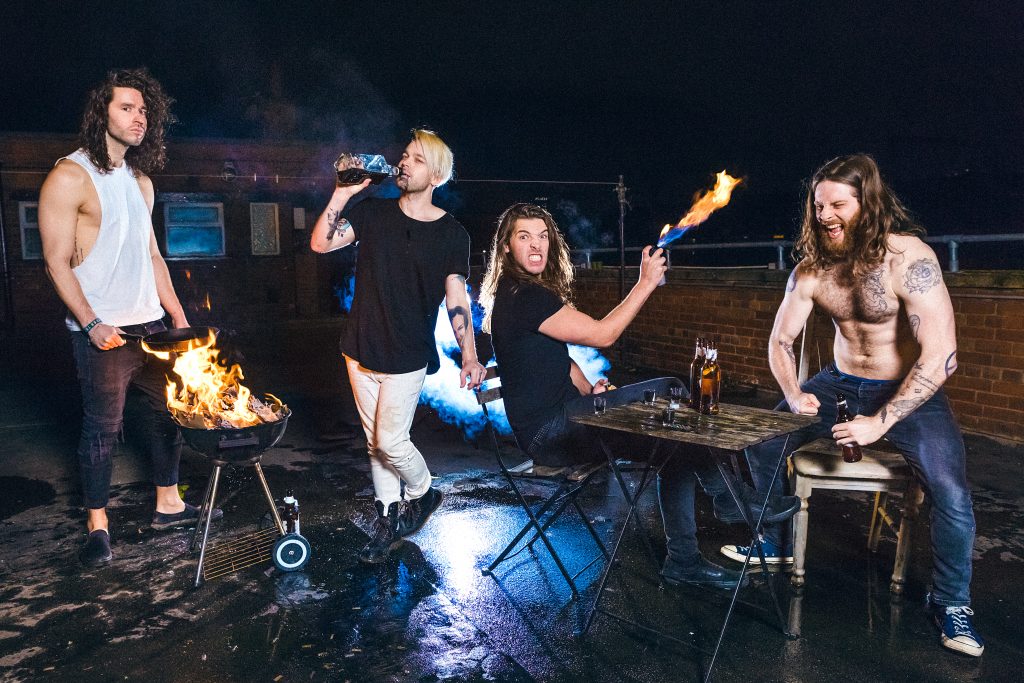 Losing Streak is the second single to be released from Dead Extras’ new EP ‘No End In Sight’, due for release in early 2020. ‘No End In Sight’ was recorded at Chairworks Studios in Castleford with esteemed producer Bob Cooper (Nai Harvest, Cult Dreams, Nervus, Self Defense Family).

The video for ‘Losing Streak’ was shot by venerable cinematographer Shaun Hodson (Volbeat, Fozzy, Sleep Token, Thy Art Is Murder) at Freedom Mills in Leeds. Surrounded by blindfolded cult members, hundreds of candles and wearing horrific make-up, it’s unlikely you’ve ever seen anything like this before.

The band considered this to be a standard Saturday.

Since forming in 2017, Dead Extras have played shows with Life Of Agony, Doyle, Teenage Bottlerocket, Puppy, Lightyear, Ducking Punches, developing a reputation for commanding performances with dramatic flair. Their new EP marks a change in direction towards even more chaotic and intense songs, moving at a breakneck pace without compromising the blistering complexity the band is known for.