Home Dance Music Dance-Reviews SINGLE REVIEW: Fiat Lux – ‘(How Will We Ever) Work This Way’ 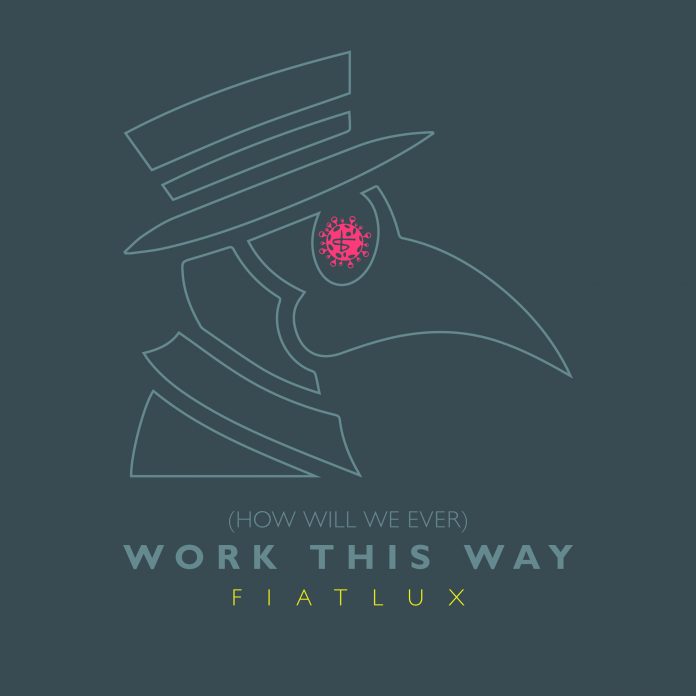 Last year I had the enormous pleasure of attending Fiat Lux’s reformation gig (read my review) which was something of a spine tingling experience for me to be honest. They are very much a band who still have it and can still do it.

This single is something of a teaser to let people know what to expect from their new album – which has sadly been halted in production by the current lockdown. On the evidence of this release the new album promises to be fantastic.

The easy thing would be to describe it as a banging piece of 80s’ style synth-pop, and tell you to get listening to it right now. That would be the easy thing, but I’m not going to be taking the easy way out, because that’s not the whole story.

You’ll see that I said 80s’ style synth-pop not 80s’ synth-pop, and this is because while you can hear those things that remind me of that part of my youth – stabbing keyboards, those big vocals, a rhythm track that has that early drum machine feel, a soaring sax – Fiat Lux have sprinkled this with sounds and a feel of today. It sounds like I remember 80s’ synth-pop/80s’ classic pop sounding rather than what it actually sounded like. Look I think we’ve all been there – you hear something you thought was, for example, the heaviest piece of metal way back then and it’s actually pretty weedy sounding now. But that memory of what it sounded like at the time you heard it firstl is still in your head.

So, as I said in my review of the gig, is this something that is mainly going to appeal to their original fans or does it something for now. It has something very much for now, I’ll say that louder, IT HAS SOMETHING VERY MUCH FOR NOW. Fiat Lux make music that is for anyone who likes synth-pop,and for this track in particular, music you can dance to. I could list bands that this reminds me of, but that would be only that useful for people of, let’s say, a certain age. OK so you’ve twisted my arm – just a couple – ABC and Heaven 17.

Perhaps, on reflection, I should have left it at ‘a banging piece of 80s’ style synth-pop’ because that’s what this is. Get your dancing feet ready, turn your sound up loud, put this on, and dance your arse off.

SINGLE REVIEW: FUDGE. – ‘Money To Be Made’

SINGLE REVIEW: Ava in the Dark – ‘Delete Us Forever’