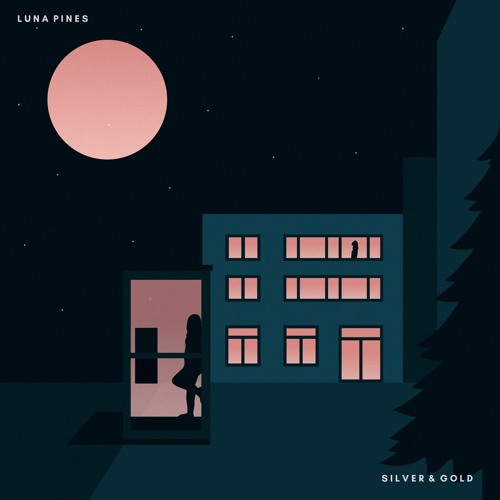 A new release from Luna Pines is always a fabulous thing; for a start you know that it’s going to be great at the very least. The review is usually just a matter of confirming that and telling you what it sounds like. And on a personal music fan level I love the band and where they take me with every release.

For ‘Silver & Gold’ they’ve gone in what I might – and in a rather lazy way – describe as synth pop style. In that it’s definitely poppy, and there are synths and guitars. But as you might expect with Luna Pines they have their own way of doing things.

Strangely the first thing I thought of on hearing this track was that it had something of Buggles (for those of you who might be too young to remember Buggles, they were a duo that featured Trevor Horn – perhaps better known as a producer – who made electro-pop. They are probably remembered more for ‘Video Killed The Radio Star’ than anything else). It also has something of the sparkling pop sound of Dollar – a pop duo that Trevor Horn produced – who are something of a guilty pleasure for me.

Enough of this musical trip back in time. As I said the sound here is synth pop but they’ve taken that purely as a starting point. For a start the vocals are fx’ed into something sing-song and strangely unsettling for all of that sweet sound – there are layers to discover in this song. And then there is their usual many layered sound; this is a track to sink into and take in the layers, the sounds that are warped and mutated deep in the mix or unexpected.

So yes, this is a track that rewards closer listening than it may initially indicate. Not only do you get to wallow in the lovely sounds but also you’ll get a feel that in all of that sparkly pop sound there’s a deeper emotional level. But even if you don’t do ‘deep listening’ this is a joy — a tune to love, a beat that’ll have you up and dancing. This song has a beauty all of its own.