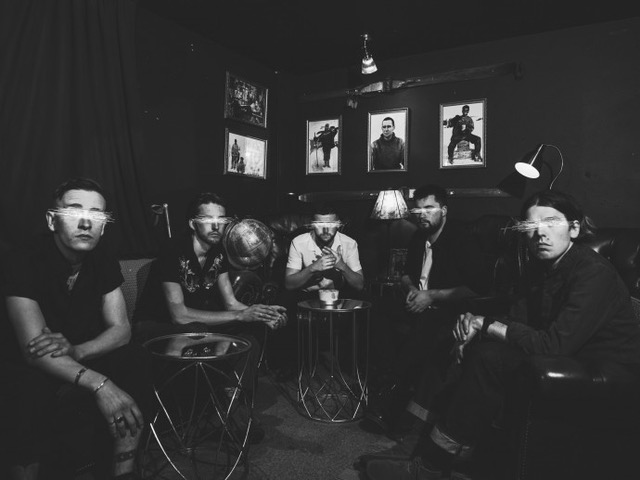 Breaking through the glass ceiling of dreamland and into a disorienting realm of nightmare noir, ‘Will My Dreams Be Electric Tonight?’ is the new cut from Leeds five-piece Household Dogs.

Edged with the dead-eyed purr reminiscent of Nick Cave courtesy of frontman Declan Newcombe, ‘Will My Dreams Be Electric Tonight?’ sees the songwriter inviting us into the shadow-cast depths of his sub-consciousness. After a distorted dream one night in which he vicariously lived through a troubling situation, Declan found himself haunted for some time afterwards. Poring-over its vivid incidents and psycho-analysing its meanings, he channelled his thoughts into what would become ‘Will My Dreams Be Electric Tonight?’. As Declan reflects on the genesis of the lyrics:

“‘Will My Dreams Be Electric Tonight?’ was inspired by a dream I had in which someone was sleeping with my partner. I was actually there, in the room, I couldn’t see what was happening but I knew it was going on. I can still see the room in my mind’s eye. I can see the white walls and the sunlight coming through the blinds.

I think in a broader sense it’s about disassociation from events that are taking place around you. Maybe an interpretation of helplessness and an inability to act on a situation, but who am I to make such sweeping statements?”

Recalling the claustrophobic confines of Bauhaus’ productions and the oblivion spaciousness of The Cure at their most darkly atmospheric, the track hints to their 80s post punk influences while clearly signposting the creative and intrepid pastures new in which they are heading. Initially written in the basement of a previous house members Matt Fogg and Declan Newcombe shared together, through intensive further sessions and live airings, the track was slowly fleshed-out to amass the glowering gravitas it now holds; a testament to the band’s hunger to evolve and grow.

“Writing for us is an evolutionary process.” says Declan. “We create, arrange and practice a song at which point we play it live and parts tend to change. Once we have sounded it out and solidified what we are doing we record it. More often than not it will change again in the recording process. The song takes various forms along the way, growing from its bare bones adding and stripping parts to give the story the effect it deserves. At times working like this can be like pulling teeth but as it was with ‘Will My Dreams Be Electric Tonight?’ it can be a liberating and swift.”

With a noble independence and fierce DIY ethic, Household Dogs strive to assert complete control over their art. As with their previous releases, ‘Will My Dreams Be Electric Tonight?’ was recorded, produced and mixed entirely independently, with bassist and resident producer Matt Fogg taking the reins. The artwork was created by Declan himself, and nods to the intensity of lyrical narrative.

“It’s an image of a painting I did. The painting is a first person view from my bed and depicts light as it comes through the blinds onto the wall. I saw the same image in the dream which inspired the lyrics.”

For going on two years Household Dogs have been intricately weaving together elements of Alternative Rock, Americana, 80s post punk and beyond. The Leeds based five-piece use melodies remnant of 50s dustbowl America to create a backdrop onto which lyrics paint stark and honest portraits of their own enigmatic world.

The Dogs launched into 2019 with turbulent single ‘Lonely Lover’ securing widespread attention ahead of their debut EP. The single followed previous release, ‘Is This All’which attracted BBC Radio 6 airplay and a ‘10 out of 10’ review from BBC Radio DJ Tom Robinson.

Touring throughout summer 2019, the band have gained a reputation for ungovernable live sets, with memorable performances at festivals like Live At Leeds 2019, alongside support slots with the likes of The Blinders, Fizzy blood and Giant Rooks earlier in the year. The band now look to a string of UK performances throughout the Autumn – catch the band at the following dates and venues:

Household Dogs are; Declan Newcombe on lead vocals and guitar, Ross Day on guitar, Alex Fletcher on guitar and pedal steel, Matthew Fogg on bass and Josh Hagan on drums.