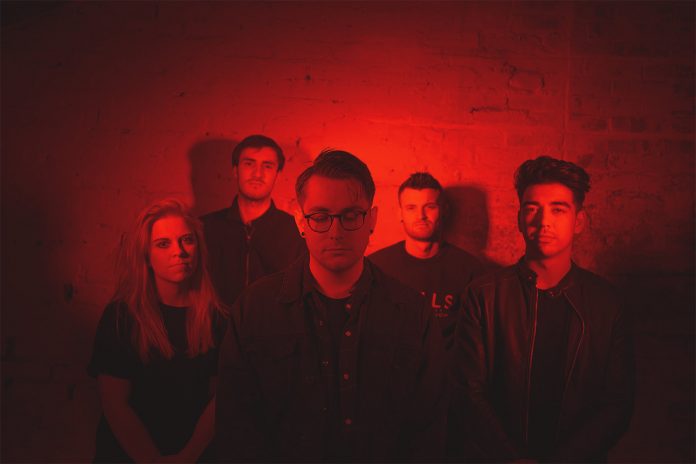 MAYPINE have dropped the second single from their forthcoming EP. Entitled ‘Weather’, vocalist Jase dedicates the track to his fiancee, explaining: “It’s essentially a song about letting your guard down and opening up to people. Specifically in this case, it refers to the person you love. Allowing that person to shoulder some of your burdens and take on some of the strain, so that it doesn’t overwhelm you. It’s not weak to accept help when you need it.” ‘Weather’s release follows that of the epic ‘Give’ here, both of which appear on their forthcoming EP ‘Bend/Break’, set for self-release on 6th July.

Completed by Becky on lead guitar/vocals, Dan on rhythm guitar/vocals, Tommy on bass/vocals and James on drums, MAYPINE selected their name on the basis that it wouldn’t tie them to any specific genre. Previously playing material in a pop-punk vein, they reveal that ‘Bend/Break’ should be considered their debut release: “As a band, we decided to remove our debut EP from all streaming platforms. This is not to say we’re not proud of it, but we just felt that we needed to be as authentic as possible and to write songs that reflect who we are, not who we felt we needed to be.” They describe ‘Bend/Break’, which takes it’s name from American Football, as being a “much truer representation of our band and we feel we’ve definitely discovered our ‘sound’ as it were.” The move is in part informed by the recent struggles that Jase has weathered: “Following a fire at my flat, my fiancée and I lost the majority of our things and had to rebuild. Obviously, this was an incredibly stressful time and I felt like I had the weight of the world on my shoulders and could bear no more burdens. However, I fought through and became a much stronger person in the face of adversity.”

Heading to The Ranch to work with engineers Neil Kennedy and Daly George, mastering duties were handled by Grant Berry at Fader. Taking inspiration from a Trophy Eyes documentary encouraged the band members, who are fans of an array of artists and genres, to “allow their separate influences to positively impact their writing, not just the obvious influences.” The result is an alternative rock burst primarily taking inspiration from Boston Manor, Thrice, PVRIS and Nirvana. Jase concludes: “‘Bend/Break’ is a therapeutic record. I had so many emotions and so much frustration that I need to expel through music. It’s definitely helped the healing process.”