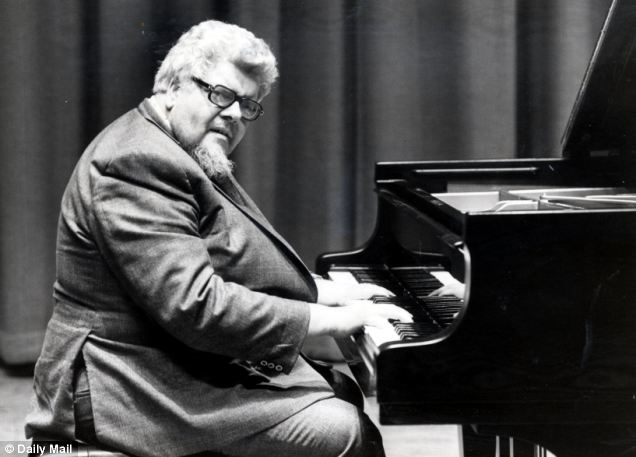 There are plays that leave you thinking for days afterwards – and Virtuoso at the Three Minute Theatre, Manchester was one of those. My friend and I discussed it all the way to the train station – holding conflicting views about the motivations and personalities of the drama’s central couple. While the play’s central theme – whether musical genius is more valuable than a person’s mental wellbeing – remained unanswered. And unanswerable.

Virtuoso charts a turbulent period in the life of concert pianist, John Ogdon (performed, most convincingly by seasoned tv and musical actor, Simeoen Truby) and his relationship with his wife Brenda Lucas (former Coronation Street actress, Kerry Willison-Parry). Heralded in his lifetime as one of our country’s greatest pianists, Ogdon won prestigious prizes such as the International Tchaikovsky Competition in Moscow in 1962, (which he shared jointly with Vladimir Ashkenazy). In the early 70s Ogdon experienced a significant breakdown, and was diagnosed with schizophrenia, but was later thought to be bipolar. Ogdon’s total immersion in his music – he was able to play most pieces at sight and had committed many to memory – and his lack of rehearsal for some of his performances, seems to indicate that his mental health issues were intricately linked with his skills.

Ogdon’s dead father, who had experienced frequent psycotic episodes, was brought to life on stage by Peter Gibson – who plays both the ‘ghost’ of the dead man but also Bernard, a friend of Ogdon’s, who seemed to have upset him during some minor business negotiations concerning a charity performance. I especially loved Gibson’s portrayal of the father, which had a heightened edge of pantomime madness, lending a humorous but also sinister twist to the domestic settings.

Brenda managed many of the couple’s business affairs and the play depicts her as increasingly frustrated by her husband’s tendency to leave all the daily practicalities to her. Especially as his behaviour becomes more threatening and unpredictable. (Apparently John Ogdon was known to others for his gentleness and mild manners and the play never makes it clear whether this was normally reflected within is marriage, and only changed during his illness. My own father was a man known for exquisite manners outside the family and a terrible temper at home – so it’s possible I brought my own perceptions into the drama, at this point)

It was while they were both studying at the Royal Northern College of Music in the mid-50s (formerly The Royal Manchester College of Music) that Ogdon and Brenda met and their relationship is at the very heart of this play. Brenda speaks openly in the play of her recognition that her husband possesses a rare talent she will never have, but hopes that they will do some recordings together, as she still has aspirations for a musical career. As John becomes more and more ill, and subjects Brenda to physical and mental assaults, it is she who must make decisions about her husband’s treatment at the hands of mental health services. Unwillingly she consented to him undergoing ECT and was then disappointed and angry when this impacted on his musical talents. And Brenda became the victim of his attacks when this frustration became too much for him.

This brought us to the bit where my friend and I disagreed. She saw the representation of Brenda as a woman more in love with her husband’s talents than the man himself, who chose to walk away when Ogdon was no longer able to perform at national level. However I found myself sympathising with this character – whose excellent performance by Willison-Parry reminded me of a more rounded and realistic version of Margo from the Good Life -or was it just that voice?. A woman both highly capable but also highly frustrated, and standing alone in a world dominated by men. For me, she was a character who valued her husband’s talents but also recognised that they made him what he was – and that without them, he would lose the ability to truly express himself. Yes, she was portrayed as highly flawed – but so was he. They were two all-too-human partners in an all-too-human relationship, united by their passion for incredible music.

Written by William Humble (On Giant’s Shoulders, An Unsuitable Job for a Woman, Maigret, Juliet Bravo) Virtuoso as originally shown as a film for tv in February this year. Under the direction of Sue Jenkins (perhaps better known for her acting roles in Brookside, Coronations Street and a range of tv, stage and radio dramas) this small but perfectly formed version of the play kept this reviewer engaged from start to finish. (Although someone in the audience said they found the second half a little too long winded) The atmosphere in the pint-sized performance area of the Three Minute Theatre, is intimate to say the least, and the play’s setting of front rooms worked well at creating a sense of being right at the centre of the couple’s turbulent relationship as Ogdon’s mental health unravelled.

Humble was in the audience at the performance, and I spoke to him at the end. I said I found the play’s treatment of mental health issues much more engaging and humorous than many I’d seen on the subject. Humble told me he’d been impressed by the performance he’d just seen and was especially pleased with the second half, which follows Ogdon and Brenda’s transfer to the USA where John took up a tutorial role and received more effective support from a therapist, who recognised his condition as bipolar disorder.

The play ends with John Ogdon returning to the international concert scene after the ghost of his father has finally left him alone, and Brenda and John reuniting in an awkward but seemingly natural way for a couple, who are only human beings, after all.