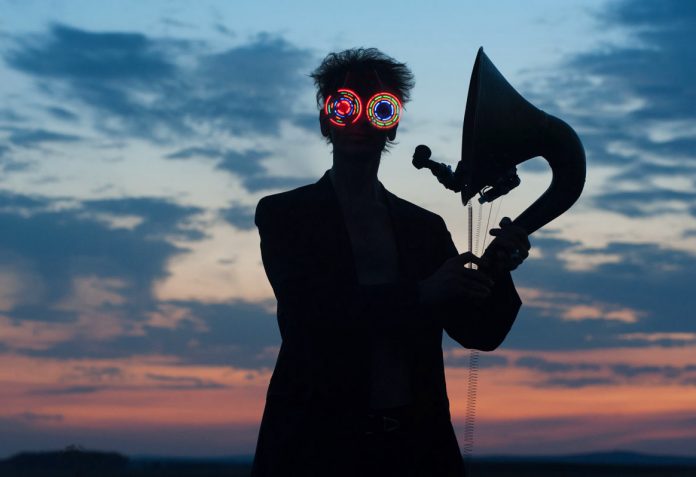 Inimitable musician, inventor and all-round polymath – THOMAS TRUAX – returns in 2018 with a brand new album: ‘All That Heaven Allows’, and today announces a series of live shows throughout February and March in support of the release.

With an array of headline dates in Cambridge, Exeter, London, a number across Yorkshire and more, PLUS a series of joint dates with the legendary BOB LOG III throughout March; there’s plenty of opportunities to see this master in his element.

‘All That Heaven Allows’

Set for release via his own Psycho Teddy imprint on 2nd February 2018, ‘All That Heaven Allows’ is the latest LP from the eccentric American songwriter.

In what will be his ninth full-length album, we find the maestro anything but settled. After five years based in Germany, Truax began 2017 in the US, but left again the day after Trump was sworn into office in January. He has rarely stopped to look back from thereon. He got married in March (in Gibraltar) and relocated to the UK shortly thereafter, with a steady stream of tour dates and recording sessions always on his agenda. Along the way, he always kept an eye on the news, an ear to the ground, and a notebook in pocket.

The result of these travels is ‘All That Heaven Allows’ – ten new tracks of surreal Americana and sonic adventure. With songs littered with trains, flying machines, dreams, romance, shootings, hurricanes, migrants, ‘bad leaders,’ an unfortunate spider, escape, transcendence, alligator shoes and more solid advice from the recurring comforting presence of Thomas’s Granny; Truax’s latest long player is a celebration of life and sound and a search for meaning and hope in troubled, dangerous times.

Given the Global context in which this album was written, it is perhaps no coincidence ‘All That Heaven Allows’ also shares its title with Douglas Sirk’s classic 1955 film of the same name. The tale of a middle-aged widow who falls for a younger man of a lower class, Sirk’s film is set in an American community that appears postcard-perfect on the surface, a modern heaven-on-earth, but underneath resents and ultimately ostracizes those who do not conform to its strict ideas of propriety.

Giving insight into the ideology that informed his latest album, Truax reveals:

“There are a lot of flying references in this album. In Freudian dream interpretation, you fly in your dreams when you feel pinned down or trapped in your waking life. A lot is happening in this modern world that is so despicable and overwhelming. Because of technology we can be spectators of all of it all at once, and it may be more than we are capable of ingesting. Our fight-or-flight mechanisms are doing overtime, and I see it in my friends and in myself that this can be psychologically paralyzing. We need to dream and escape to maintain our sanity, but we also can’t ignore the very real problems that may be the death of us if we don’t do whatever we can to try to help solve them. The pursuit of balance between those fights and flights is an underlying theme with this album.”

While the new album was very much written against an ever changing backdrop, in terms of recording process there was of course always one constant: him. Something of a one-man-band and loop-pedal virtuoso, as ever most of the instruments and vocals on ‘All That Heaven Allows’ were laid down by Thomas himself.

As many will have heard already, on his latest album Truax also teams up with the singular Basildon-born/Berlin-based talent Gemma Ray for the heart-stopping duet: ‘Save Me’. The lead single for album, the track has already garnered national radio support from the likes of Radcliffe/Maconie and Gideon Coe on BBC 6Music.