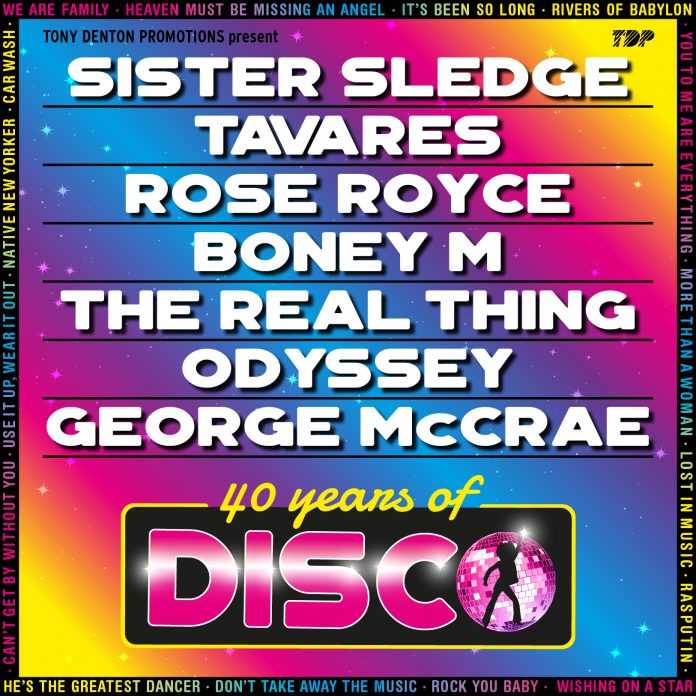 For four decades disco has ruled the charts and dance floors and is currently stronger and more popular than ever! The ‘40 Years of Disco’ show is a high-energy hits only live extravaganza! The tour takes in 4 arenas across the country starting at Leeds First Direct Arena on 15th March and culminating on 18th March at Liverpool’s Echo Arena.

Disco started in the early 70’s in the clubs of New York with Studio 54, which opened in 1977, being the most famous. The same year the ‘Disco Fever’ album spent 6 weeks at No.1 and was still there at Christmas. ‘Native New Yorker’ by Odyssey became one of the first major disco hits and they also happen to be on this groundbreaking tour! By 1978 the ‘Saturday Night Fever’ album spent 18 weeks at No. 1 only to be knocked off the No.1 spot by another star act from the ’40 Year’s Of Disco’ tour – Boney M with their album ‘Night Flight To Venus’ (that also spent 4 weeks at No.1). In 1978 the ‘Best Disco Album In The World’ spent 6 weeks at No. 1. Disco has never gone away and is here to stay!

SISTER SLEDGE: The group sold millions of records worldwide with the album ‘We Are Family’ earning them multi-platinum status for sales in excess of two million in the USA alone – and going gold in several other countries. They went onto have multiple disco anthems that include the UK hits ‘Lost In Music’, ‘We Are Family’, ‘Thinking Of You’, ‘He’s The Greatest Dancer’ and the No.1 ‘Frankie’. At present Sister Sledge consist of original members Debbie and Kim alongside Tanya (niece of one of the original members).

TAVARES: For over two decades Tavares had several Top 10 UK singles. They won a Grammy Award for their work on the soundtrack to ‘Saturday Night Fever’ that was recently certified 15 times platinum. 1975 turned out to be their most successful year chart wise with their biggest US hit, ‘It Only Takes a Minute’ – later successfully covered by Take That and sampled by Jennifer Lopez. This was followed by a string of hits including ‘Heaven Must Be Missing An Angel’, ‘Don’t Take Away The Music’, ‘Whodunnit’, ‘More Than A Woman’, ‘One Step Away’, ‘The Ghost Of Love’ and ‘The Mighty Power Of Love’. They were inducted into the RI Music Hall of Fame in 2014. Earlier this year they performed on the CBS Television Special “Stayin’ Alive” – a musical salute to The Bee Gee’s where they performed a duet with R&B star Jason Derulo on ‘More Than a Woman’.

ROSE ROYCE: The LA group Rose Royce had a massive hit with ‘Car Wash’ which was on the album soundtrack of the 1976 movie of the same name that starred Richard Pryor and George Carlin. The 2 million selling soundtrack gave them a two further hits ‘I Wanna Get Next To You’ and ‘I’m Going Down’. The follow up album 1977’s ‘In Full Bloom’ featured the hits ‘Wishing On A Star’, ‘Do Your Dance’ and ‘Ooh Boy’, going platinum. Their third album ‘Rose Royce Strikes Back’ (1978) featured the killer ballads ‘I’m In Love (and I Love the Feeling)’ and ‘Love Don’t Live Here Anymore’. Their greatest hits album reached the No.1 spot on two separate occasions in 1980 spending 34 weeks on the chart. Many major stars have covered their hits including Mary J Blige & Madonna who did a heart-wrenching version of ‘Love Don’t Live Here Anymore’.

BONEY M: Everyone knows the name and everyone knows at least one of their songs. The group had massive worldwide hits with songs such as ‘Daddy Cool’, ‘Sunny’, ‘Ma Baker’, ‘Rasputin’, ‘Hooray! Hooray! It’s a Holi-Holiday’, ‘Belfast’ and ‘Painter Man’. Audiences worldwide have been thrilled by the energetic visual performances of all their well-loved songs. ‘Rivers of Babylon’/’Brown Girl In The Ring’ reached No. 1 for 5 weeks and stayed in the charts for an astounding 40 weeks. It is the 7th biggest selling single of all time in the UK, selling over 2 million copies. The band also had the Christmas No.1 that year with ‘Mary’s Boy Child’, which is No.10 in the biggest selling singles of all time, selling in excess of 1.8 million copies. They are also the only act to have 2 all time best sellers in the Top 10! This line up features original member Maizie Williams.

THE REAL THING: The multi-million selling soul band features their three original vocalists Eddie Amoo, Chris Amoo and Dave Smith who are celebrating the 40th anniversary of their debut hit single ‘You To Me Are Everything’ this year. The single reached No 1 in the UK. The trio have sold over 3 million singles that also include the hits ‘Can’t Get by Without You’, ‘Whenever You Want My Love’ and ‘Can You Feel The Force’.

ODYSSEY: One of the most successful soul/disco acts of their era that culminated in the early 1980’s when they topped the UK charts with ‘Use It Up And Wear It Out’. They scored several other Top Ten hits in Britain and throughout the world. From their debut album emerged their first smash single – ‘Native New Yorker’, an international hit late in 1977. After that the hits then came thick and fast – the long running ballad ‘If You’re Looking For A Way Out’, a brilliant re-working of the Lamont Dozier classic ‘Going Back To My Roots’ and ‘Inside Out’ amongst others.

GEORGE McCRAE: Was a prime mover on the early disco front. Disco kings Harry Casey and Richard Finch of KC & The Sunshine Band both produced and wrote his output with McCrae securing a hit on his first try with “Rock Your Baby,” it topped charts in 1974 around the world. Other hits include It’s Been So Long’, ‘I Ain’t Lying’ & ‘I Can’t Leave You Alone’.