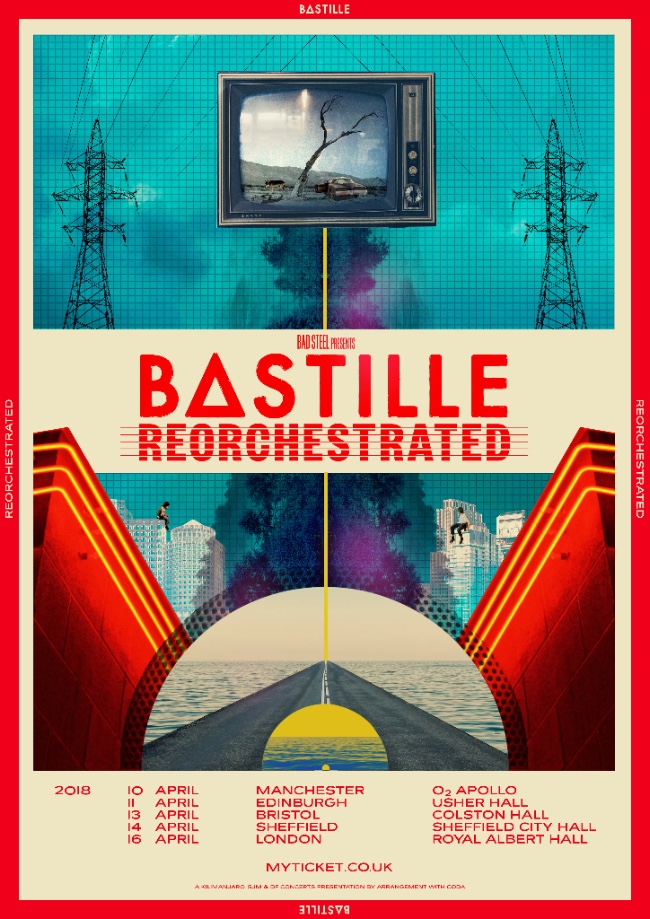 Bastille have announced what promises to be a stunning Reorchestrated tour in April 2018. The tour will see the band performing in intimate venues and concert halls with a string and brass section, and choir showcasing reworkings of the highly acclaimed No. 1 albums “Wild World” and “Bad Blood”. The tour was inspired by the intimate Union Chapel show in May of this year for the Streets of London charity where Bastille’s performance featured all new arrangements of their songs, a powerful departure from their “Wild World” arena shows.

Frontman Dan Smith explains “Earlier this year, we did a special one-off show to raise money for Streets of London, in it we deconstructed and totally rearranged a bunch of our songs using strings, brass, and a gospel choir. It was one of my favourite things we’ve ever been able to do.”

“We are incredibly excited to take that setup on the road for this Reorchestrated tour, which will see us playing some amazing venues and concert halls around the UK and Europe. It makes for a very different kind of Bastille show where we totally reframe and reimagine our songs with the help of some incredible musicians, in a special and intimate setting.”

It’s been a busy month for the band with the release of ‘World Gone Mad’ taken from the Netflix film Bright starring Will Smith and collaborating with Craig David on his new single ‘I Know You’ which is currently sitting in the top five of the UK single charts.

Tickets for the Reorchestrated tour go on sale Friday 15th Dec at http://bastillebastille.com