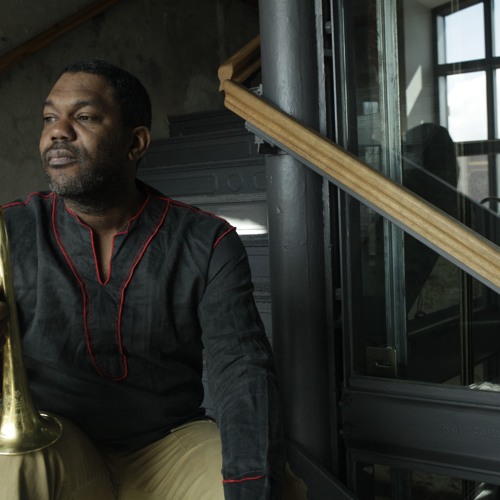 Summer 2021 marks the UK tour of ‘Portrait: Reflections On Belonging’, the new album from innovative trumpeter Byron Wallen. Having been struck by the mix of cultures in his home borough of Woolwich in South East London, Byron Wallen was commissioned by the PRS Foundation to compose a special piece based on his experiences entitled ‘Anthem For Woolwich’, which won widespread critical acclaim from critics, peers and music fans alike.

The new album ‘Portrait’, Wallen’s first recorded release in 13 years, became an endeavour that flourished from the same source, resulting in an imaginatively constructed musical exploration into ancestry, diasporic journey and the cultural roots of contemporary and indigenous cultures. Byron explains: “Sitting in the central square in Woolwich one day, I was struck by the vibrant and wonderful people. The mixture of cultures and nationalities was so unique. Shortly after the event, PRS For Music Foundation commissioned me to put this observation into music creating a lasting homage to the area. The project, which ultimately led to this album, deepened my artistic and personal relationships with my immediate surroundings and community.”

The album is further enhanced by Wallen and his band’s personal engagement with his local surroundings through teaching, workshops and ultimately collaborations. Special guest vocals from classes 3G and 3H of Plumcroft Primary School resonate on several tracks perfectly demonstrate the theme of community spirit that runs throughout the album.
Byron Wallen’s music is distinctive and individual, also inspired by his experiences with musicians on his travels around the world, including countries such as South Africa, Uganda, Zimbabwe, East Africa, Morocco, Nigeria, Indonesia and Belize to name but a few. These diverse experiences have undoubtedly influenced Byron’s creative output, and the fact that he combines this with true and desirable elements from the jazz tradition really make his music stand out as an inimitable, one of a kind sound.

Having studied with luminaries such as Jimmy Owens, Donald Byrd and Jon Faddis, as well as being a go to trumpet player for the likes of George Benson, Chaka Khan and Hugh Masekela and also a contemporary of Andrew Hill, Mulatu Astatke and King Sunny Ade, Byron Wallen is a revered and respected musician in jazz, world music and beyond. His Gayan Gamelan project have recently attracted much attention for their adaptation of Boards of Canada’s seminal album ‘Music Has the Right to Children’, the sensitivity of the compositions marrying beautifully with Wallen’s orchestration of the gamelan sound.

On ‘Portrait’ Byron Wallen plays the trumpet, flugelhorn, shells and percussion. He is accompanied by a killer band with Rob Luft on guitar, Paul Michael on bass and Rod Youngs on drums, with congas and taking drums from Richard ‘Olatunde’ Baker. The overall result is a sublime listen, ultimately providing hope and inspiration by way of creativity, diversity and unity.