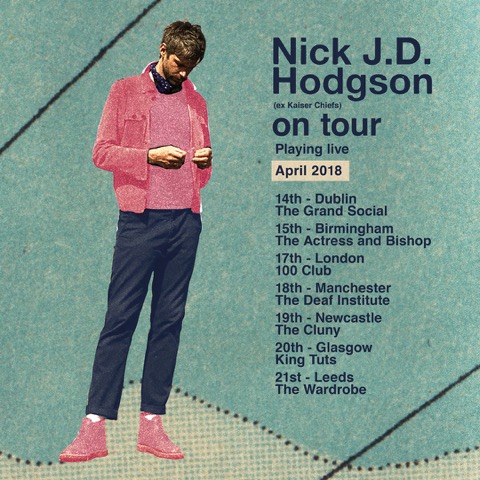 This was never the plan when Nick left Kaiser Chiefs in 2012. The plan was to stay at home writing and producing for other people. After five years of writing songs with everyone from Shirley Bassey to Rat Boy via Mark Ronson and John Newman, the plan changed.

His solo album ‘Tell Your Friends’ came out on 26th Jan 2018 to great acclaim: album of the week in the Sunday Express, 4* in the Evening Standard and Dork Magazine (‘Hodgson’s innate genius shines brighter than ever before’), whilst The Sunday Times revelled in ‘this lovely album’s artless, low-fi approach’ and Q Magazine noted that Hodgson’s ‘ear for a winning melody remains acute’.

The April tour will be his first since the arena and festival headline slots with Kaiser Chiefs when Nick played drums and was the principal songwriter. He will be joined by his fabulous new band, including members of Howling Bells and The Dead 60s. Expect to hear the new album alongside a few indie anthems courtesy of his back catalogue.

Tickets go on sale 9am Friday 9th February and are available from gigsandtours.com, seetickets.com and local ticket vendors.

Tell Your Friends is Out Now – stream or buy here