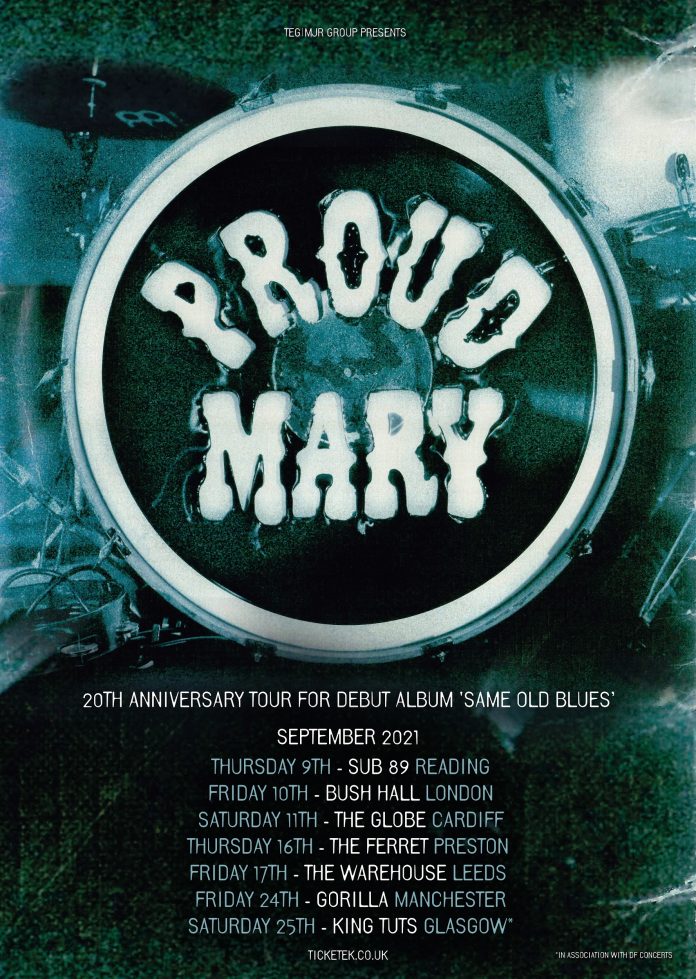 Celebrating 20 years of their classic album ‘The Same Old Blues’, PROUD MARY are very pleased to announce a series of special anniversary gigs this Autumn.

Kicking off at Reading’s Sub89 venue on 9th September 2021, the five-piece will be taking in stops at Cardiff, London, Preston, Leeds and Glasgow, as well as appearing at Manchester’s Gorilla for an unmissable homecoming set on 24th September.

Playing the album in its entirety, start to finish, the shows will be an opportunity for fans to reacquaint with seminal singles including “All Good Things” and “Very Best Friend”, as well as key album tracks such as the invigorating opener “Give A Little Love”, their rousing Stones cover “Salt Of The Earth” and more…

A sensational debut album whose legacy continues to live on, ‘The Same Old Blues’ was released on Noel Gallagher’s Sour Mash records in the summer of 2001. While drawing influence from the canons of Dylan, The Rolling Stones and The Faces, singer Greg Griffin’s hair-on-end vocals and Paul Newsome’s accomplished songwriting offered a definitive style all their own that had audiences hooked from the outset.

Written in just ten days and produced by Gallagher with assistance of Gem Archer, the album was a hit with press and public alike. Catapulting them into a hectic touring schedule, the Manchester quintet soon found themselves supporting the likes of Oasis, Neil Young, The Stereophonics, Paul Weller and Ocean Colour Scene. Cementing their reputation as a class live act there and then, two decades and five albums on, the band will now be revisiting those songs that propelled them to stardom once more as they prepare to bring ‘The Same Old Blues’ back to live audiences in commemoration of its 20th Anniversary.