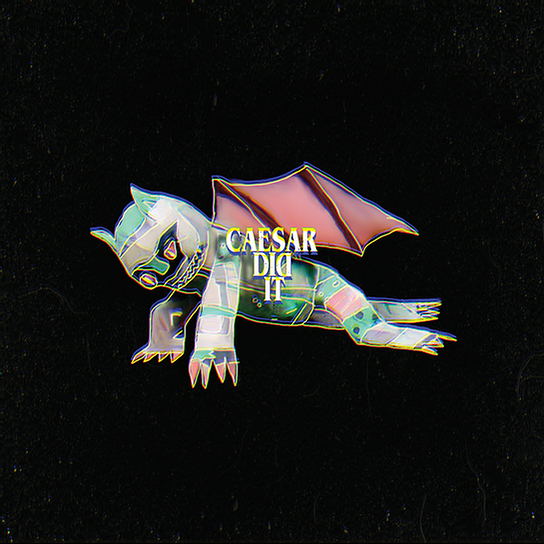 I was, to say the least, impressed with the single I reviewed from Sheffield’s Caesar Did It – ‘Changing’ but now they’ve gone and released an album.

Let’s get straight into it, no delay.

Opening track ‘Find Your Love’ is immediately reassuring me that the band are really on one here. The band does grunge but with subtlety and inventiveness. An example is right here; this track has an intro before the intro – random sounds, bits of distant vocals – it’s intriguing and catches the attention. And as it crashes into the track proper yes it’s grunge but there’s elements that are not at all grunge-like – hints of almost metal, a rumbling bass intro. And crucially there’s rawness.

‘Coming Down’ does the extremely heavy with hints of sweetness. Riffs that a metal band would give their right arm for. Odd but wonderful bits where it goes all jerky. And bloody hell is there some great drumming on this track. One to lose your shit to, big time.

‘Slip Away’ is full of contrast – light and shade, dynamics to the max. A groove to die for. But under all those heavy guitars there’s a tune. I’m not entirely sure the band would thank me for this but I hear hints of glam metal in there. The intriguing thing about this track is that while it’s heavy, very heavy, there are things that are poppy. This is what makes it so good.

Time for a full on riot ‘Feed Me’ is just one big glorious freakout. Fantastic guitars, switches to grinding rock. ‘Start Again’ takes that grunge thing and adds in an almost indie-rock/pop element. The switches between these are just heart stopping – the way the heavy riff sweeps in and the vocals are turned up to scream. Wow this is brilliant.

‘How Sweet’ brings the groove, hints of garage rock, even elements of dance. Tuneful vocals over these guitars. How sweet? So fucking sweet.

Up next ‘Changing’ contrary to my usual practice I am going to change my mind over this. Don’t get me wrong I still love this but this track kinda inhabits that intersection of metal, grunge and alt-rock. The things that caught my interest are still there – the great drumming, the ‘being unafraid’ of throwing in surprises.

Next up is ‘J.J.D.O.Y.G.T.P’ (I kid you not). My helpful friend said ‘strange name for a song, a bloody great song’, I wouldn’t disagree. This is one of those tracks where you think you’ve got it, but then it goes and does something so unexpected. It twists, it turns, it jerks. One moment it grinds, the next it turns all raw and garage, the next it’s doing something bloody outrageous.

The intro to ‘Break’ is strangely reminiscent of early Pink Floyd. But this is before it goes all… well it’s hard to describe. There are hints of metal, more than hints of psychedelia. This just has to be heard, people, it’s joyous.

And then to the closing track. ‘Lose Yourself’. Well just do what the song says – letting yourself sink into this is fab. Waves of heavy sound, a grind that drags you down.

How to sum this album up, let me just come down from the experience…

Now Caesar Did It might describe themselves as a grunge trio but grunge is merely their jumping off point. They seamlessly blend in other sounds to make something that is very much their own. And yes, sometimes this can be surprising but that surprise soon turns to delight. The thing about Caesar Did It is that you just don’t know where they are going to take their music; and that is a wonderful thing.

I’ve said this before but you can’t mix it up if you don’t know what you’re doing musically; and this is a band who know, really know, what they’re doing. The playing on this album is outstanding, truly outstanding, and the vocals, the vocals are incredible.

Caesar Did It rock and this album rocks. Just go listen to it, do that now.