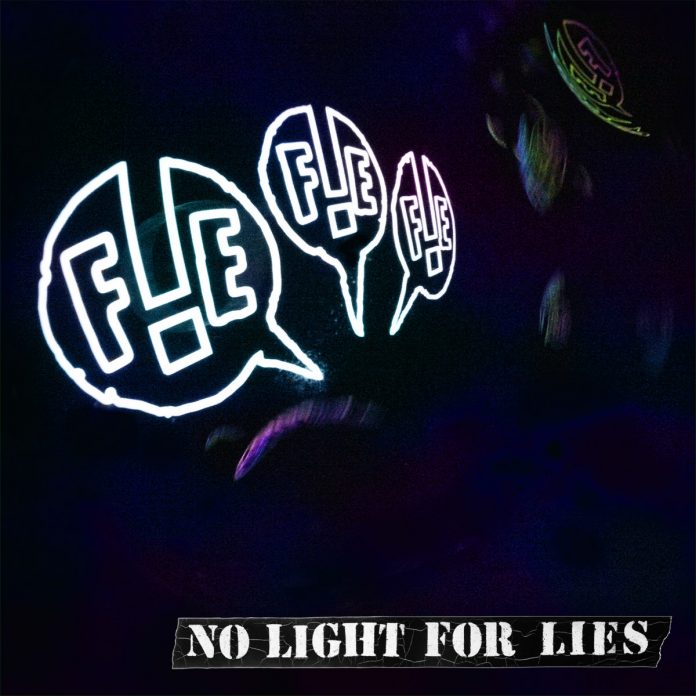 Before I start this review I have a confession. And it is that Fie! Fie! Fie! Are one of those bands I’m always forgetting I rather like. It almost comes as a surprise every time I hear them that I like what they do. I think it’s because they are so far away from what I usually listen to – those ‘where in hell does that sound come from’ bands and those oh so beautiful grinding noisy bands – that I have to be reminded that I actually really like well written guitar – acoustic and electric – led songs with, and I think this is why I do actually rather like Fie! Fie! Fie!, this touch of arch, a touch of twist. Without that these would just be, how shall we say it, rather pleasant, and wouldn’t stick in your head. The other thing about them is that, and this I promise won’t influence the review, is that they are a nice bunch of people.

I think, now I really have to think about it, that one of the reasons I like what they do is that I hear these hints of bands and singers from the 70s I have rather a thing about like the quieter acoustic songs of Bowie, the edge of strangeness in Cockney Rebel, touches of Bolan and Mott The Hoople.

The first surprise I got from listening to this is the range of material, there are gentle ballads, there are way arch songs, there are political songs, and there are, strangely for a band who emphasise that they are acoustic led, out and out electric freak outs.

And before we dive in, I just have to say that the guitar playing on these songs is just hugely impressive. It’s not overly flash, but you can hear the quality there.

The album starts with an instrumental intro that I found vaguely Floyd sort of sounding in a gentle acoustic way. And then to ‘Edge of Space’ which is one of my album highlights. This track was actually released as a single some time ago and I remember being somewhat surprised by quite how different it sounded to things I had heard from the band before. For this people is spacey in a gentle sort of way. It’s all keyboard washes and simple guitar lines. And here you get to hear that slightly mannered vocal which works really well.

I like ‘Hit the Spanish Main’ but this is a track which has divided opinion in the people I’ve played it to. Some like me think it’s a fun groove of song, others think it’s possibly a little too much of a fun track. But I’m going to go with what I think here, this is just a blast, and check out that vocal – lovely stuff – and those blasts of electric guitar. And it’s funny people, there’s nothing wrong with a track that makes you laugh out loud.

‘Everything I Told You’ is one of those songs that I’m finding it hard to decide how I quite feel about it. On the one hand I love the gentle acoustic arrangement but the vocals I sometimes like and sometimes not. And checking my previous review I appear to have changed my mind about this track, but that happens sometimes. ‘Famous Liars’ continues in that acoustic arrangement but it’s more urgent, it has this gentle pulse of a rhythm. This is easier to say, I really like this track.

And then to ‘From the Wreck’ another of my highlights. The first time I heard this I got hints of Cockney Rebel and that hasn’t changed with repeated listening. This track has the nicest ringing guitar.

And something that just jolted me, after the let’s say, smoothness of the tracks before ‘Bullet Points for the Bulletproof’ is this loose, almost folky thing. Look I really really like this but it’s something you just have to hear OK.

And they are not finished yet, ‘Bloody Lane’ is part urgent acoustic thing and part almost screaming guitar thing. This thing rocks, it rocks in it’s own way, but it rocks.

‘Bleeding Obvious’ is an epic almost six minute track. Quite what it’s about I haven’t been able to work out. It’s clearly about something, there’s a hell of a lot of really well put together lyrics. My guess, and it is only a guess, is that it’s something of a political comment but I can’t be sure. But the thing is that it’s such a well put together song that listening to it again and again in an attempt to get a handle on what it’s about is a really good experience.

Album closer ‘Outrospective’ is an out and out rock, fuzzed out guitar led track at least at first. It has a slight feel of space rock in there. But it has the most beautiful dropout section that it fades out on.

The thing about this album is that it’s an album, it has songs that are immediate and others that you need to let grow on you. It has things which are of the Fie! Fie! Fie! I know from seeing them play live, and then it has those things that come as surprise. These are songs with words that are extremely well written. Taken as a collection it’s extremely impressive, there is the odd song that for me doesn’t work as well as others, but that may not be what you feel.

And I’m still being surprised by quite how much I like this album even though I’ve listened to it lots. I’d suggest taking a listen, you may be surprised too.