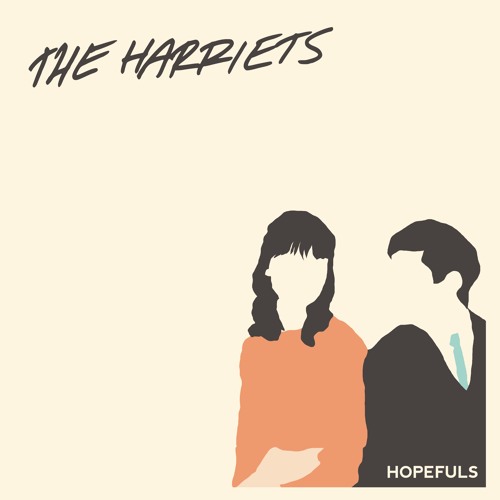 I, like many other people, adore The Harriets. They make songs that are musically full of joy and have great words, words that can make you smile, make you reflect and muse on life in general. So what we have here is their debut album, yep a whole album of The Harriets’ music. Some of this will be familiar from their gigs if you’ve seen them recently (I say recently but of course I mean pre-lockdown). But – and it’s a fairly large ‘but’ but I can’t imagine that there are that many of you who haven’t heard at least one song by the band – if you’ve not seen and become totally enamored with the band and their music this is your chance to hear what the band do.

Album opener ‘Cafe Disco’ was released as the lead single from the album, It’s a wonderful thing, here’s how I summed it up in my review:

‘People, this is wonderful. It’s wonderful because it has a tune that’s so damn earwormy, because it makes you want to dance all of your troubles and worries away, and because it leaves you with a huge smile on your face, a spring in your step, and a chorus in your head that you just have to sing again and again. This is 3 ½ minutes of utter joy. It’s summer in a song.’

It’s a great start to the album.

We take a step down in tempo for ‘Trip To The Moon’. This is a wistful song that has something of, and this may be yet again my rather strange mind, of an early Bowie feel to it. It has the sweetest tune, it’s a song of love. And yet it has, even though I know the track, an unexpectedly wonderful out-there guitar solo.

‘Darlin’’ has something of a 60s’ feel. It has these vocals that are somewhat 60s’ pop in a rather corny way. I don’t mean the track is corny, the song is a bouncy thing that has you bopping. Lyrics that make you beam. Piano that makes you smile and horns (or at least horn like sounds)

Hmmm, given the present situation ‘Have Fun In Your Workplace’ may seem a rather strange name for a track, but let’s leave the present situation aside. It’s a country-ish thing. To my mind it’s kinda loaded with irony, it’s deadpan. But it also features some rather out-there guitar, a lot of rather wonderful out-there and subtle guitar. It’s a bit of a grower, it took me a while to really get this.

‘Rules For Travelling’ is one of those immediate Harriets’ songs. It grabs you, gets everything tapping. And features some rather fab piano. As does ‘Johnny’. I may have misinterpreted the lyrics somewhat – and this wouldn’t be the first time I’ve done that – but this seems to be about somebody who’s gone (and I’m going out on a limb here but I’d take that as far as died). It’s really a tribute and reflects on how people are feeling now that Johnny’s gone. It is one of those Harriets’ epic songs musically. It shifts from wistful to big to huge, and back again. This is a song that it’s really worth listening to, the words are great.

We shift to something lighter with ‘Come Home’. It has a yearning feel, as befits a song pleading for a loved one to come home. It has lovely horn sounds, great vocals and harmonies.

‘Fall Out Of Grace’ is rockier. My helpful friend said ‘it sounded a bit like The Harriets do Springteen’. That’s if Springteen had done angelic choirboy type vocals. This will make sense if you listen to the words, honest.

The album closes with ‘The Boy You Knew’. An almost folky ballad with the sweetest feel. It’s basically voices and acoustic guitar and it’s beautiful.

There’s not one song on this that you’re going to feel ‘hey, that’s a bit of a space filler’, all of the songs show a particular side of what The Harriets do – be it 60s’ style pop, songs that make you smile and laugh out loud, songs that make you (or at least me) want to be a teenager again, and songs that surprise with the depth of emotion.

I’ve not mentioned the playing as it’s fabulous across the whole of the album. I especially loved the guitar and keyboards, the way they work together. They’re able to mix it up vocally as well but you’re always going to love the harmonies and the way they weave their voices across each other.

But it’s the songwriting that’s the standout here, The Harriets know how to put a great song together. The band’s songs are an example of words and music in perfect harmony. And the words of these songs are words that deserve you really listening to them.

Existing fans may miss songs in the style of say ‘Harry’ or ‘Television’ but the band, with the addition of keyboards, have matured musically, they’ve been able to add a richness to the sound that really adds something, and have made them able to do things that are more complex whilst retaining that immediate feel.

These are songs, and an album, that you can go back to time and time again. There’s always going to be something new – a sound you hadn’t noticed before, a line you hadn’t fully got before.

There’s a song there for everybody, whatever you feel you need. I adore this. This is a joy.

The band say ‘Hopefuls was recorded between January 2019 and March 2020, at home. Its songs are about love, escape, nostalgia and the places of our lives’.