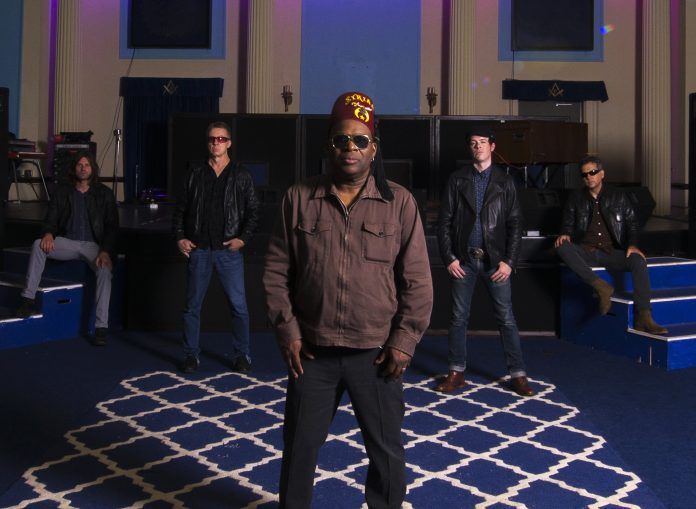 From a far out moon beyond the rings of Saturn to a dingy studio in Cincinnati, BARRENCE WHITFIELD AND THE SAVAGES’ new platter embraces a cosmic and groovy unification. It’s a wild, electric phantasmagoria of blues, rock, garage, and soul; it blasts off into diverse orbits only to come back together into a singular Savage cosmology. ‘Soul Flowers of Titan’ is about people shooting guns, separating, coming home (someday), falling in love, running around, leaving this earth, going crazy, drinking coffee, and thinking about Sun Ra.

Titan is the largest moon of Saturn, a planet which astrologically symbolizes pain and struggle. Cincinnati, where the album was recorded (at Ultra Suede Studio), is home to many classic and unknown independent labels, like King and Federal, that fostered a frayed and raucous sound in the 1950s and ‘60s. With such history at their fingertips, the Savages could not resist the urge to celebrate and elaborate on this legacy, to go places high and low, faraway and downhome.

Longtime followers of the Savage Sound will notice right away a heavier sound, a blast of B3 and Rheem organs (courtesy of newest Savage Brian Olive) and a live-in-the-room urgency. It’s a multi-faceted vehicle for a top-notch band wigging out with beefy, staccato blues scales, punk and garage riffs, fronted by a first-order shouter well-heeled in the aesthetics of soul, R&B, and rockabilly.

Barrence’s deep, gravelly rumble anchors muscular struts into madness, out the door and off to Mars. “Slowly Losing My Mind” and “I’m Gonna Leave You Baby” are by Federal alum Willie Wright and his Sparklers, while “Let’s Go To Mars” is an original by Savages guitarist Peter Greenberg and bassist Phil Lenker, written after multiple viewings of an early ‘70s documentary on Sun Ra. Also from the Federal canon is the Midnighters’ “I’ll Be Coming Home Someday,” done here with a somewhat menacing dark street corner doo-wop vibe. “I Can’t Get No Ride,” originally by Finley Brown on the M.O.C. label, will inspire you to Frug off towards a fantastical horizon. And try NOT to flip when the original raunchy rockabilly shuffle “Tall, Black and Bitter” hits the speakers. It’s an album that will take you everywhere and, in doing so, will bring you right back to the center.

‘Soul Flowers of Titan’ is Barrence Whitfield and the Savages’ third LP for Bloodshot Records and fourth since reforming in 2010 after a 25-year hiatus. BW&S shot out of Boston in the mid-’80s with the force of a rocket ship. Through their sweaty dance party shows and love of primal soul, they were to R&B what the Cramps were to rockabilly—a gateway musical drug for nascent underground roots mavens. Along with original Savage Peter Greenberg (The Lyres, DMZ) and Phil Lenker, they released several records on Rounder Records, became a favorite of BBC DJ Andy Kershaw, and won seven Boston Music Awards. After they reunited in the 21st century, adding Andy Jody on drums and Tom Quartulli on sax, they released Savage Kings on Shake It Records and Dig Thy Savage Soul and Under the Savage Sky on Bloodshot.