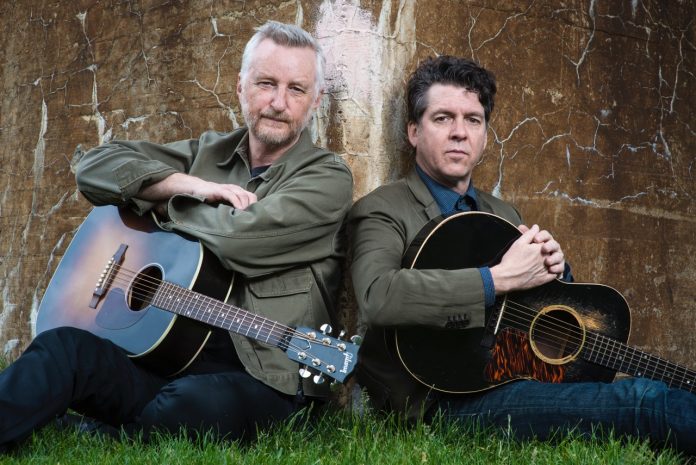 Like many a British musician before him, Billy Bragg, bard of Barking, singer songwriter, political activist, and musical historian has made no secret of his obsession with the songs and the mythology of the Americas, not least those of his artistic and philosophical forebear Woody Guthrie. With his friend and collaborator, US singer songwriter Joe Henry, he has made an album that focuses on the transformative part the railroad played in disseminating the songs that gave birth to the rock’n’roll era. ‘Shine A Light – Field Recordings From The Great American Railroad’ by Billy Bragg and Joe Henry, released on Cooking Vinyl on 23rd September ’16, is a collection of railway-themed classic songs recorded in the course of a 65 hour journey across the US on the Texas Eagle railroad service. Featuring thirteen songs originally recorded by legendary singers such as Lead Belly, Hank Williams, Jimmie Rodgers, Glen Campbell and more, the album is an atmospheric travelogue, a gripping lesson in musicology, but most importantly it is a beautifully recorded collection of wonderful tunes.

In March 2016 Billy Bragg and Joe Henry, guitars in hand, boarded a Los Angeles-bound train at Chicago’s Union Station. Winding along 2,728 miles of track, the pair recorded songs while the train paused to pick up passengers. In waiting rooms and at the track side in St Louis, Fort Worth, San Antonio, Alpine TX, El Paso and Tucson they set up their recording equipment, and performed classic railroad songs while keeping half an eye on the train and jumping back on board just before pulling out for the next town. After four days crossing the country, they pulled into Los Angeles at 4:30am, recording their final song in Union Station accompanied by the first chirpings of the dawn chorus.

The resulting album ‘Shine A Light: Field Recordings From The Great American Railroad’ features the perfectly matched voices of Bragg and Henry and captures the varied atmospheres of the environments in which they recorded—from the close proximity of soft-furnished sleeping cars to the cathedral-like ambience of historic railway stations.

Says Billy: “Railroad songs provided the bedrock of American popular music, from Jimmie Rodgers, the Singing Brakeman, to Lead Belly, whose repertoire provided several of the songs for this project. In this country, Lonnie Donegan’s 1956 hit ‘Rock Island Line’ sparked the skiffle craze, inspiring a generation of British teens to pick up guitars and form the groups that invaded America in the 60s, from the Beatles to Led Zeppelin.

Growing up in the UK, I’d always been aware of this tradition but when I traveled to the US, I was surprised to find how few people look to the railroad as a means of transport. With this project, we wanted to explore the transformative power that the coming of the railroad had on the lives of ordinary people by taking these songs back to the places that inspired their creation. Traveling on the train and recording the songs as we went allowed us to both visit places that were important 125 years ago when the lines were laid, but to also explore the viability of the railroad as a means of transport in the 21st century.”

Says Joe: “The emergence of the railroad in America boasted of our might and sprawling enormity, yet signaled a deep desire for close community, connectivity. The songs that grew out of and alongside this innovation remain to tell this story of collective national character.”

Billy Bragg and Joe Henry most recently worked together when Henry produced Bragg’s acclaimed 2013 album Tooth & Nail. The duo will tour the UK together later this year, performing songs from ‘Shine A Light’ and more. Full tour details are as follows:

Track Listing for Shine A Light…

Billy Bragg has been a fearless recording artist, tireless live performer and peerless political campaigner for over 30 years. Among the former Saturday boy’s albums are his punk-charged debut Life’s a Riot With Spy Vs Spy, the more love-infused Workers Playtime, pop classic Don’t Try This At Home, the Queen’s Golden Jubilee-timed treatise on national identity England, Half-English, and his stripped-down tenth, Tooth & Nail, his most successful since the early 90s. The intervening three decades have been marked by a number one hit single, having a street named after him, being the subject of a South Bank Show, appearing onstage at Wembley Stadium, curating Left Field at Glastonbury, sharing spotted dick with a Cabinet minister in the House of Commons cafeteria, being mentioned in Bob Dylan’s memoir and meeting the Queen. At their best, Billy’s songs present ‘the perfect Venn diagram between the political and the personal’ (the Guardian).

In a career spanning 30 years, Joe Henry has left an indelible and unique imprint on American popular music. As a songwriter and artist, Henry is celebrated for his exploration of the human experience. A hyper-literate storyteller, by turns dark, devastating, and hopeful, he has an author’s eye for the overlooked detail.

Henry has collaborated with many notable artists on his own body of work, from T Bone Burnett, Daniel Lanois, and Van Dyke Parks on one side of the spectrum, to Don Cherry, Ornette Coleman, Brad Mehldau, and Bill Frisell on the other. A three-time-Grammy-winning producer, Henry has made records for Bonnie Raitt, Hugh Laurie, Lisa Hannigan, Elvis Costello, Solomon Burke, and many others. In 2015, Henry helmed a recording session for the late Allen Toussaint. The resulting album, American Tunes, will be released this year. In 2013, Algonquin Press published, Furious Cool: Richard Pryor and the World that Made Him, a book co-written by Joe and his brother Dave Henry.

Henry’s most recent studio album, Invisible Hour, was released on his own Work Song label. The album features numerous guests including The Milk Carton Kids as well as Lisa Hannigan, who co-wrote the title track along with Henry and best-selling novelist Colum McCann. As a solo artist and a producer alike, Henry’s records are marked with a consistent sonic depth, attention to narrative, and emphasis on the beauty of spontaneity.

See Billy & Joe performing The Midnight Special here http://po.st/ShineALight1. This track is also available to download immediately when you pre-order the album from the official store or iTunes.