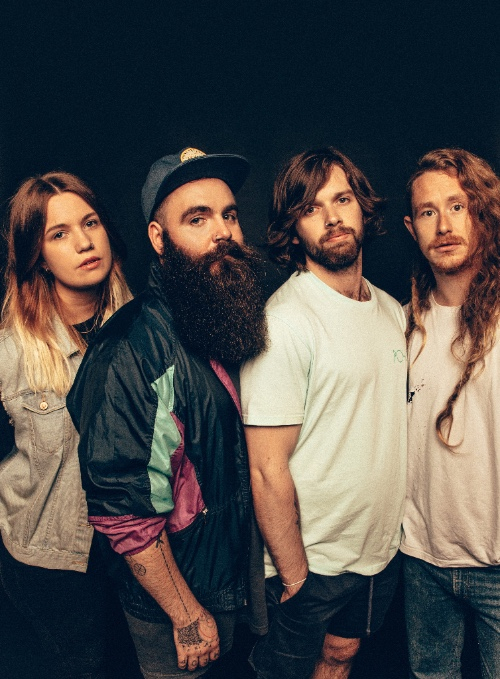 Liverpool’s thrilling fuzz-pop quartet Clean Cut Kid have announced details of their much-anticipated debut album. A string of exhilarating singles have given snapshots of their brilliance and now comes a record to match. ‘Felt’ will be released on April 28th through Babe Magnet Records/Polydor and is available for pre-order from today. It will be preceded by a new single, ‘Leaving You Behind’, which has already received a Hottest Record accolade.

Clean Cut Kid are Mike Halls, Evelyn Halls, Saul Godman and Ross Higginson. The four-piece are one of the most exciting breakthrough bands in the UK, their inventive take on anthemic guitar-pop the product of intense writing and rehearsal sessions at the band’s practice space in Liverpool. Their five singles so far – ‘Vitamin C’, ‘Runaway’, ‘Pick Me Up’, ‘Make Believe’ and ‘We Used To Be In Love’ – have introduced a band full of creativity, who mix classic melodicism with a sonic adventurousness. ‘Felt’ was recorded at Liverpool’s Parr Street Studios with Blossoms and The Coral producer Rich Turvey, London’s Konk Studios with Arcade Fire collaborator Craig Silvey and London’s Voltaire Studios with Cam Blackwood (George Ezra, Wolf Alice).

What emerges is a contemporary indie-pop record filled with defiant pop hooks and emotionally-charged fragility. The band say that “the concept of ‘Felt’ is the timeline of a break-up from a relationship falling apart as you reach the end of the A side of the record; to flip into the B side where we emerge from the breakup and back into a new relationship.” It’s a record that drags the listener through the rollercoaster of emotions experienced during the end of one relationship and the beginning of another, songs with a voice that is refreshing and honest in a generation of emotional detachment. ‘Felt’ is an album that deals with the hard truths and uplifting highs of modern love.

Clean Cut Kid will embark on a headline tour in April and May and will also head out in support of Brit Award-nominated troubadour Michael Kiwanuka in May. The dates for the band’s headline tour are: