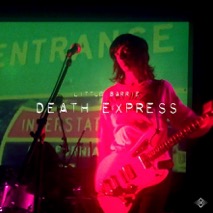 Teaser single ‘Love or Love’ was released last December to critical acclaim. New single ‘Produkt’ was released on 30th June 2017. The video was directed by Douglas Hart (founding member of The Jesus & Mary Chain and video director for the likes of Paul Weller, Primal Scream, The Horrors and Toy).

Made up of Barrie Cadogan (guitar/vocals), Lewis Wharton (bass) and Virgil Howe (drums), their fifth album, ‘Death Express’, packs a heavy punch, channelling the three members’ ferocious musical chops into a raw, DIY response to today’s atmosphere of confusion and division. There’s no political message, just lyrical food for thought, and some of the tautest, most incendiary grooves you’ll ever hear, enticing even dancefloor-shy listeners to hip-shake away their cares. High-octane meditations on surveillance paranoia (‘Copter’), devious policing at mass protests (‘Molotov Cop’) and greed (‘Vulture Swarm’) have rarely felt so irresistible to body movement.

For Little Barrie themselves, global events of the last 12 months were a surreal backdrop to their own bold progress as a band. After 15-plus years of underground excellence together, this pathologically questing triumvirate were seeking to up their game, ready for Album No. 5. “In downtime at our rehearsal room, we’d be looking at the news – everybody’s gone nuts!” says Lewis. It was at Boogie Back 2, their practice space in Hornsey, that the sound of ‘Death Express’ was born – and recorded, as they ended up spurning big, expensive studios, in favour of a couple of ancient MacBooks, and an old tape machine.

The album’s genesis kick started, when Little Barrie were invited to provide incidental music for ‘Better Call Saul’, a spin-off series from hip TV phenomenon ‘Breaking Bad’, for which they’d already cut the theme tune. With no time to book a studio, they were forced to do it themselves, in their practice room. The response was favourable, and they began to feel that such DIY takes had a vibrant quality often lacking from ‘proper’ productions. Says group leader Barrie, “Such amazing records have been made when people are breaking the rules – weird, stripped-down, self-made records like ‘Oar’ by Skip Spence, and ‘There’s A Riot Going On’ by Sly & The Family Stone. There’s a bedroom aspect to it, and a street aspect, too, which felt right for what we wanted to say this time”.

Three of their previous four albums were made at Edwyn Collins’s West Heath facility in London. Last year, however, Edwyn upped sticks for rural Scotland, a happy development in his ongoing rehabilitation from serious illness, which left Little Barrie at a crossroads. Back in their rehearsal bunker, they demoed their first two new tracks, including ‘I5CA’, a song documenting an insane tour of America’s West Coast, which saw them pounding up and down Interstate Five between shows. It came out vibey and spontaneous, like a ’60s garage nugget repurposed for a hip hop block party. Instead of then slavishly re-recording the tracks in a hi-tech studio, they sent them on to an Edinburgh-based dance producer called Tom Forrest: he zipped up the mix, in Barrie’s words, “bringing a better spread and width of sound.” In layman’s terms: in your face; live and dangerous.

Self-releasing the two tracks on a 7-inch 45 before Christmas ’16, they got an ecstatic response, and it was a no-brainer to make the rest of ‘Death Express’ the same way. With Virgil’s propulsive breakbeats pushed to the max (his CV includes a rap-rock band called Lunatic, and a secure grounding in drum ‘n’ bass), these tracks leap from the speakers as Little Barrie have never done before, expressing an urgency rare in a band approaching the end of their second decade together. But then, this is no everyday band…

Yet, these irrepressible vibesmen have managed to remain underground, one step ahead of short-lived trends, with all their joy in music-making intact. Anyone interviewing them can expect a colourful conversation, taking in heroes from right across the pop-cultural spectrum, and how that culture’s bonding social purpose is the antidote to our political/industrial fears.

On paper, the album’s title looks dark. The title track arose, says Barrie, “when I was flicking through my phone to find someone’s number, and I realised there’s quite a few people in there who aren’t here anymore. What with the state of the world, it feels like, as much as you can, you have to be around the people that are important to you. It’s been inspirational knowing Edwyn, seeing how he’s pushed really hard, and got his life back more than the experts expected. Looking at things that way, the title’s positive. Time’s short. None of us know how long we’ve got.” So, yes: the clock’s ticking. Seize the day. Time to jump aboard.

Little Barrie are guitarist and vocalist, Barrie Cadogan, bassist Lewis Wharton and drummer extraordinaire, Virgil Howe. In addition to being in the band, Wharton is also a motorcycle enthusiast and illustrator; Howe, the acclaimed drumming son of rock figurehead Steve Howe, produces and DJs in the UK and abroad; Cadogan is a world respected guitarist and the go-to guy for the likes of Primal Scream, Paul Weller, Edwyn Collins, Anton Newcombe, Spiritualized, Pete Molinari, Charles Bradley, The Chemical Brothers and Paolo Nutini. It is a testament to these three players that as a band they are making their strongest music to date.