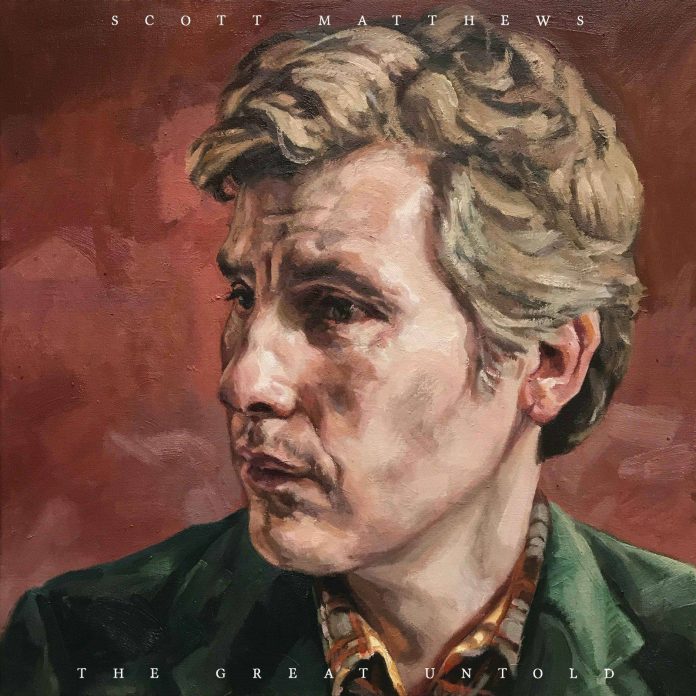 Scott Matthews’ new record, ‘The Great Untold’, deserves to be a career defining one. The sixth studio album by the Ivor Novello Award-winning singer-songwriter (Best Song Musically & Lyrically for “Elusive”) is a masterclass in honesty, instinct and reflection. A largely acoustic recording, Matthews’ new record features sparse production after being recorded over a productive winter at home. His ten-song cycle is the sound of a man now entirely comfortable in his own skin, putting his neck on the line with a collection of quietly extraordinary songs.

The ghosts of Paul Simon, Ron Sexsmith, Tim Buckley, Nick Drake and John Martyn loom large on a sixth record that revels in its stripped-back nature to show what an exceptionally strong songwriter Matthews really is. The absence of multi-layered instrumentation on The Great Untold, however, should not infer that it lacks depth. The richness in Matthews’ new work comes from the intricacy of his guitar work, influenced by the likes of Bert Jansch
and Mark Kozelek, whilst showcasing again an otherworldly singing voice that betrays an everyman inflection and down-to-earth persona.

In many ways, The Great Untold is the start of a new era for Matthews. Since his debut album, Passing Stranger, in 2006, the Wolverhampton-born artist has further refined his craft. Writing deft and sensitive songs during a trajectory that began with the ethereal ‘Elusive’, The Great Untold marks a new beginning on his own terms. The first great arc of his career was completed with his Home duology; a pair of records that reflected on his journey thus far. The Great Untold is the sound of that man moving on. Matthews is recently married, soon-to-experience fatherhood and has new hopes and fears, new stories to tell. “After Home Part 2 was finished, I was looking to move forward by marrying harmony with my experiences since the last record. The plan to write an acoustic record has always been there. And finally the time is right to do that.”

Matthews has tested himself as a songwriter. He started as a soloist and has gone full circle, again ready to fly alone. It opens new possibilities, a different type of challenge. “It takes me out of my comfort zone and has made me test myself. I’ve largely pared it down to guitar and vocals. At the beginning, there was nobody else. It’s time to surprise myself. It’s time to go back to my own world.”

Lyrically, The Great Untold is a work with poetic intent. “It’s a collection of songs that lots of people will hopefully relate to. Naturally, my starting points are from a personal perspective but most times I have to broaden the idea so it’s not so insular as a piece of music. It can be a challenge but I’m very proud of where I’ve ventured to and there’s been a lot of soul searching woven into these songs that I hope people will appreciate. When I’m writing, I’m almost hearing voices from The Masters and thinking: ‘Would they approve?’”

The point is to make a connection. “I want to move somebody with the power of moods and music.” It is in the right hands. And that’s an opposite description for The Great Untold. It is a record written by a man at the peak of his powers – “As The Day Passes”, “Something Real”, “Song To A Wallflower” and the stunning “Cinnamon” are amongst the finest in his songbook – and by a musician able to channel great beauty in songs that reveal the most human of truths.