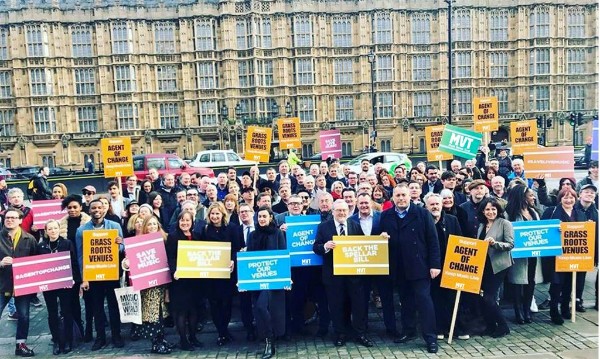 Over the past few years, they have helped build a collective voice as partner organisations such as UK Music and The Musicians’ Union have taken on the cause. When Michael Dugher became CEO of UK Music last year he said that Agent of Change would be a priority and at Venues Day 2017 he announced John Spellar MP’s intention to take a Bill to Parliament. John then spoke about why this was important.

Earlier today John Spellar MP’s Bill was read in Parliament and no objections were raised. A huge list of sponsors of the Bill accompanied the first reading, meaning that this can now progress to a second reading. Music Venue Trust would like to thank everyone who has supported the campaign so far and encourage anyone who has not yet done so to write to their MP to ask them to support the Bill.

MVT is all about collective working. They created the Music Venues Alliance to bring an end to grassroots music venues working in isolation and create a voice for the sector.

For further information head to: musicvenuetrust.com