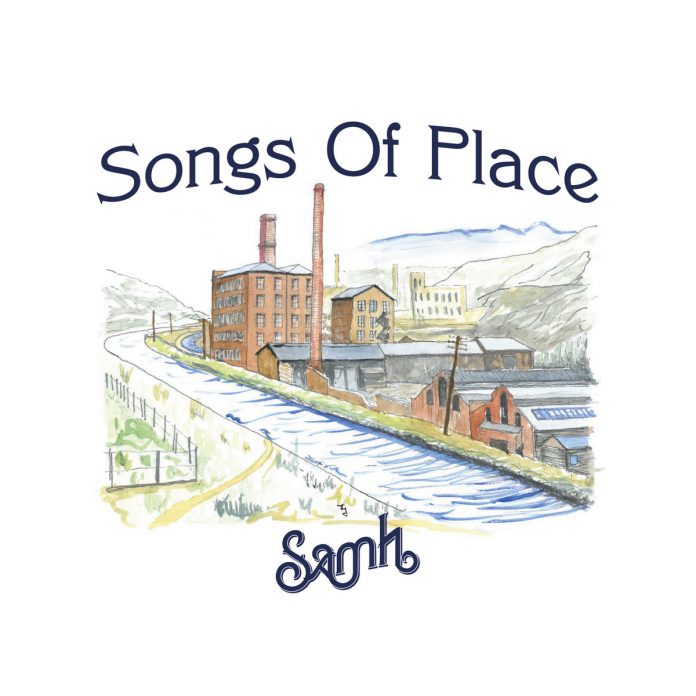 Samh’s new EP is a journey through our northern landscape, its history and the mixing of musical genres. It will only take a quick look at the song titles to see this but this won’t reveal that the sound of the tracks, in different ways, reflects what I’m going to call, something uniquely northern. And more it feels like one particular part of West Yorkshire; Huddersfield, Marden and Saddleworth.

The opening song ‘Naked Landscape’ musically evokes the feel of our landscapes while lyrically telling a story. The feel at first is folk influenced but it seamlessly, and gloriously, breaks out into a horn driven break. It’s moving, deeply moving.

Next on our journey ‘Gateway to Saddleworth’ speaks of the building of the Huddersfield narrow canal from the point of view of the people that built it. This track introduces fiddle to a track that goes from up beat folk to something that has a very definite Klezmer feel. It’s one for dancing as well as listening. Do listen because it has some wonderful lrics

‘Cropper Lads’ is a song about a skilled part of the weaving industry, and their part in the Luddite protests. The song is thought to have been written around the time of the events it describes. I’ve taken the following explanation from a website:

“Croppers, although relatively few in numbers, played a central part in the activities of the machine-breaking Luddites in Yorkshire. Prior to the introduction of machinery to do the job they had been top-grade apprenticed craftsmen, trained to produce a smooth even nap on the woollen cloth after it had been woven. They cropped the woven cloth with heavy shears and were highly skilled, and relatively highly paid so had more to lose than most by the introduction of the machinery. Prior to this they had blacked any cloth produced in a gig mill and therefore had already shown their anti-machinery stance and solidarity with the weavers. Thus croppers joined the Notting­ham­shire Luddites in raids on mills to break the machinery which resulted in desperate battles between mill-owners backed by the police and militia, and the Luddites, which resulted in much bloodshed and even death. The main action took place in and around Huddersfield.

The song refers to Great Enoch wish is a thing rather than a person:

“Great Enoch was the name given to a big hammer used to smash the machinery, rather ironically as it was named after Enoch and James Taylor of Marsden near Huddersfield who were the ingenious blacksmiths who invented the cropping machine.”

Samh’s version follows a traditional form – with acoustic, sparse rhythm and fiddle. I love two things about this track – the vocals and the fiddle which provides atmospheric emphasis.

The final stop sees us visiting Bates Mill, the last surviving textile mill in Huddersfield. It also has a completely different musical fee. It evokes the mill atmosphere by electronica, and heavily reverbed vocal. This song sounds beautiful which perhaps doesn’t reflect the historical working conditions of textile mills; but there is a world weary feel to the song which does. Perhaps I’m reading too much into this but I think we may think of our now devastated textile industry as a past good thing, whereas the reality wasn’t. There’s an innate contradiction.

This EP is a collection of songs that are beautifully put together, played and sung. They encapsulate much about our history, landscape and the people who lived and worked within it. But, and it’s big but, this isn’t just ‘an educational exercise’, it’s absolutely beautiful musically, showing yet another side of Samh’s versatility as a songwriter and performer. It’s folk, yes even the final track, because it evokes place, people and history; but it brings into the now. This is a jewel of a release, a precious jewel.