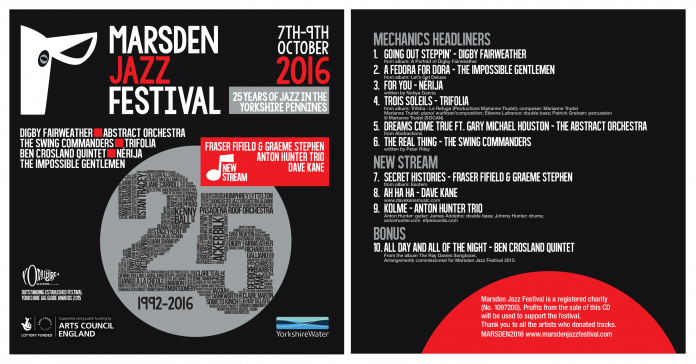 Ten of the headline acts appearing at this year’s festival have donated tracks for the CD – including jazz legend Digby Fairweather, who also performed at the first Marsden Jazz Festival in 1992.

The CD features the ‘word art’ design being used in this year’s festival brochure which includes the names of artists who have appeared at the festival over the past 25 years in the shape of the number 25. The design is also available on a souvenir T-shirt.

The CD line-up also includes three acts which are performing on the festival’s New Stream stage at the Royal British Legion this year, which features new and experimental jazz – Fraser Fifield and Graeme Stephen, the Anton Hunter Trio and Dave Kane.

Huddersfield composer and bass guitarist Ben Crosland, who has been involved with the festival for over 20 years, has also donated a track from his Ray Davies Songbook album which his quintet performed at last year’s Marsden Jazz Festival.

“This year’s festival will be a truly memorable experience for anyone who attends and we’re delighted we’ll also be able to offer a CD and T-shirt as a 25th anniversary souvenir.

“We produced a CD for the first time at last year’s festival and we’re really pleased that so many of the headline artists appearing at the 2016 festival have also agreed to donate tracks for free.

“We’ll be using any profits we make from the CD and T-shirt so help fund next year’s festival, so hopefully the Marsden Jazz Festival can continue for at least another 25 years.”

The 25th anniversary CD costs £8 and the T-shirt costs £14, or both can be bought together for £20. They are available at www.marsdenjazzfestival.com/shop and will also be on sale at the festival.