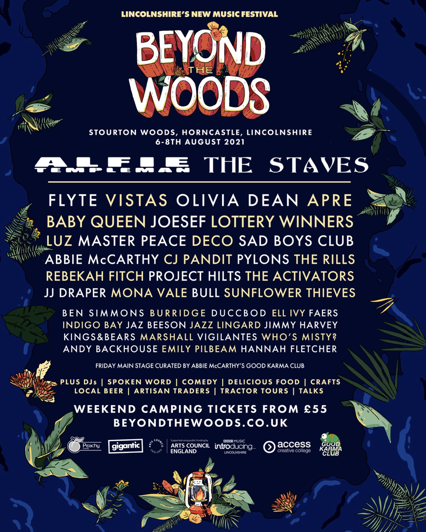 Speaking about the festival, Abbie McCarthy said “Bring on Beyond The Woods festival this summer! I’ve managed to get 5 of my favourite new acts on one stage in Alfie Templeman, Joesef, Baby Queen, Luz & Master Peace – this is going to be one HUGE party!”

Abbie has been hosting her sold out Good Karma Club nights in intimate London venues for a number of years with the event quickly becoming known as one of the best places to catch rising stars, having hosted the likes of Tom Grennan, The Amazons, Pale Waves and many more.

2021 will also see Beyond The Woods continue their support for rising local talent. Teaming up with BBC Introducing in Lincolnshire and Access Creative College, the festival adds an early stepping stone for acts and students in the area hoping to make it onto one of BBC Introducing’s national stages – a combination that has proven success with the likes of Holly Humberstone appearing at Beyond The Woods early in her career thanks to the local BBC team.

BEYOND THE WOODS FESTIVAL 2021 – FULL LINEUP:

Early bird tickets for Beyond The Woods Festival 2021 have now sold out.

Phase 1 tickets are on sale now – pricing as follows:

Tickets are available from: https://beyondthewoods.co.uk

About Beyond The Woods Festival:

Beyond The Woods Festival is an independent event run by a group of friends and music lovers. Originally starting as JoeFest, an 18th birthday party in a back garden in Lincoln, the event has grown to become a fully licensed public event which has been based at Stourton Woods, Baumber, near Horncastle, Lincolnshire since 2017.

Abbie McCarthy is the go-to-girl for the best new music recommendations. Abbie currently presents BBC Music Introducing in Kent, a radio show that is greatly respected amongst members of the industry and music fans alike for its top music curation. Abbie has discovered and championed a vast array of great acts and is very popular with listeners because of her warm, fun presentational style and infectious sense of humour

Abbie is the mastermind behind Good Karma Club, a gig night championing the hottest new bands around. The sold out nights have also featured a fair few famous faces in the crowd over the years, including Alex Turner, Bastille & Catfish and the Bottlemen. The platform has provided early shows for the likes of Tom Grennan, The Amazons, Pale Waves and many more.

You can also catch Abbie on your TV screens, via 4Music & The Box Network, hosting Boxfresh, a show that shines a spotlight on the biggest new artists on the planet.

Aside from music, Abbie’s other passion is sport, which really shone through in her entertaining coverage of the Women’s World Cup for Chelsea Women’s FC’s socials. You’ll also find Abbie guesting frequently on BBC Two’s new football show, MOTDx, a fun, youth-focused spin-off of the legendary brand.