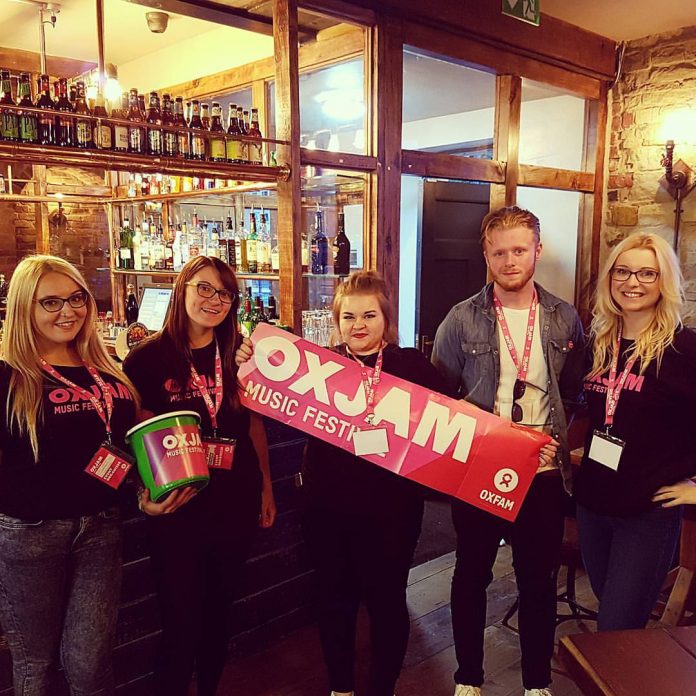 On track to be bigger and better than previous years, the festival has already signed around thirty local acts, including unsigned rock, indie and acoustic bands – watch this space for further information about the bands playing

All proceeds raised go directly to the international charity which aims to combat global poverty and provide emergency aid to third world countries.

Any further funds required to organise the event must be raised through fundraising activities and with the help of generous sponsors, suppliers and volunteers.

The first Oxjam Huddersfield festival was held in 2007 and took place annually thereafter, coming to an abrupt end in 2013. A team of five committed volunteers are now working tirelessly to bring the festival back to Huddersfield this year.

With the aim of attracting people across Yorkshire to attend the event, Oxjam Huddersfield Takeover Manager, Lisa Naylor and her dedicated team, hope to put Huddersfield back on the map and promote the talented musicians that currently contribute to the local music scene.

“With a passion for live music and our local community, the team and I are so excited to be able to bring such a fantastic event to Huddersfield. We have a number of exciting plans in the pipeline to raise money for the event and the support we’ve gained over the last few weeks is phenomenal. We hope the day itself is a huge success so that we are able to put on a great show for the people of Huddersfield every year.”

Oxjam Music Festival takes place every October. It’s made up of hundreds of events happening all around the UK, all organised by volunteers. Oxjam events raise money to help Oxfam combat poverty and suffering around the world. Since its inception in 2006, Oxjam has raised over £2.8 million for Oxfam.

Oxjam began in 2006, with the aim of creating a network of music-loving people across the UK, all united by a shared goal – to raise money to fight poverty and suffering around the world.

The Oxjam Huddersfield team consists of five volunteers and a number of charitable suppliers who have agreed to help make the festival possible. The festival itself will take place at seven venues across Huddersfield on 15th October 2016.

A number of fundraising events are taking place in the run up to the festival and the team are currently looking to recruit volunteers and bands for festival. Tickets for the festival will go on sale at the end of August and can be purchased through the website. For further information, please visit http://www.oxfam.org.uk/oxjam.