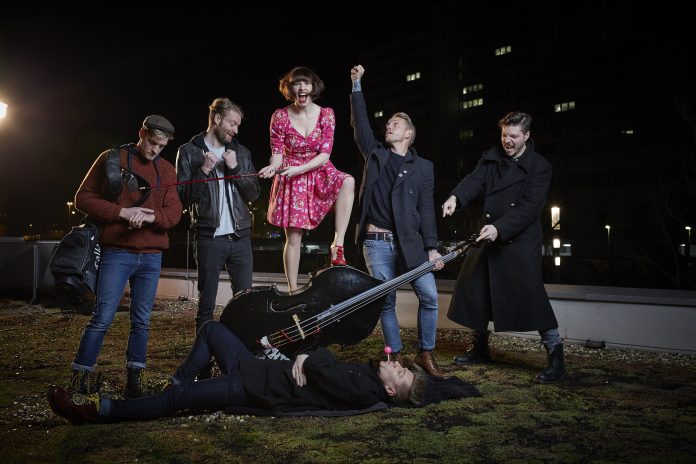 With the lead single ‘Wanted’ – a fiery Elvis-gone-folk roar of an opener that sees frontman Dan Heptinstall saluting London, New York and Cairo in a song “about looking for life in the cities we’d visit” – ‘The Devil, The Heart & The Fight’ comes out fists first.

If their folk debut album (Forge & Flagon, 2012) celebrated the sticks and their punkier second (Down On Deptford Broadway, 2015) blinked in the bright lights of London; their rocked-up third, ‘The Devil, The Heart & The Fight’, sees them go global. Pieced together while on the road, and recorded over five weeks in Newcastle Under Lyme’s Silk Mill Studio in May 2016 with producer Tristan Ivemy (Frank Turner, The Holloways), it is Skinny Lister’s most far-reaching, exciting and accomplished album yet. It’s a full-on rock record that splashes even more punk vigour and eighties pop elements across their fervent folk canvas, taking in hints of Adam Ant and The Clash. It also brings the folk storytelling tradition bang up to date with its brutally honest and close to the knuckle lyrics of real-life stories (‘Geordie Lad’, ‘Charlie’) and on-the-road mayhem, the Pogue-ish ‘Hamburg Drunk’.

A mature, vibrant and varied record, it mingles classic Skinny folk romances (‘Grace’, ‘Reunion’) with epic rock takes on rafter-rattling shanties (‘Beat It From The Chest’) and hearty Dexys-style tributes to the fans they meet on the road (‘Fair Winds & Following Seas’), plus a hitherto unseen darker side. Take the deceptively upbeat ‘Injuries’, Dan’s ode on the bruising nature of life, or ‘Devil In Me’, in which Lorna comes on like a particularly melodic Glenn Close in Fatal Attraction: “the devil in me will come for you and you’ll pay the price for not being very nice… you took my life, I’m taking yours, that seems to me a fair trade”. Gulp.

‘The Devil, The Heart & The Fight’ is like Skinny’s previous albums gone backpacking; expanding its horizons, full of adventure, discovering itself and doing things it regrets in the morning. Have heart, ye devils, join the fight.

With the exception of the 5 weeks recording the album, Skinny Lister have spent the last 18 months on the road touring across the UK, Europe and North America to ever-increasing crowds. Their infectious, feel-good and uplifting performances are winning over fans all across the globe, whether its supporting label mate Frank Turner on his arena tours or headlining their own sold out shows across America. They’re a twelve-legged party machine and one of the best live bands in the country.

Anyone who pre-orders the album by July 28th will be richly rewarded with a massively exclusive prize wherever you are in the world – a prize so amazing we can’t even speak about it yet! Just keep hold of your proof of purchase! More info to follow….