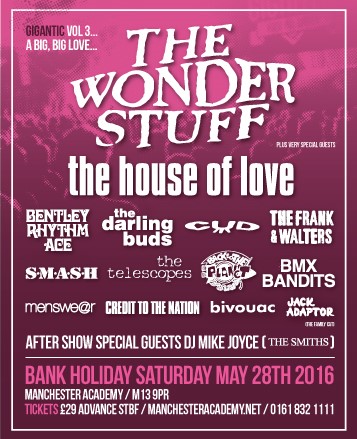 As the festival celebrates its own 3rd anniversary, the legendary Stourbridge outfit will be notching up their 30th. The iconic outfit will be holding a raucous reception do at Manchester Academy in celebration of three decades of anthemic indie do-gooding. Speaking about the headline slot, the band’s exuberant frontman Miles Hunt said:

“We are all so very much looking forward to sharing the bill with such an amazing cast of bands. Speaking entirely for myself, I’d pay top dollar to see any one of the bands on this bill. Bring it on, it’s gonna be a killer event!“

Plus: Very special guests: The House of Love

Formed in London in 1986 around the integral song-writing core of singer Guy Chadwick and Terry Bickers, The House of Love’s career and the pair’s relationship burned with a fuse like tenacity, bright and quick. Sparking off each other’s talents, the pair’s tangible and passionate chemistry set them from the pack and debut single ‘Shine On’ immediately left listeners like rabbits in the headlights, a landmark debut and a wealth of unforgettable classic singles followed with ‘Christine’, ‘Never’, ‘Beatles & The Stones’ and the stunning ‘Destroy The Heart’.

After the recent 25 year anniversary provided a perfect opportunity for a glowing re-appraisal of ‘The House of Love’, it seems the record’s place in indie history and its maker’s legacy still remain as relevant as ever. As for 2016, as we invite this seminal act to the Manchester Academy with the classic writing partnership at its core once more, you can prepare to experience something truly unique at next year’s Gigantic Indie All Dayer. Getting psyched for their 2016 special guest slot, The House of Love have said:

“We’re all excited to play at the Gigantic Indie All Dayer Vol. 3 in Manchester. It is always a pleasure coming to this fantastic city where the fans are second to none. Looking forward to some Mancunian banter!”

Former Blonde-movement bombshell Tiffany Ann is sure to “Hit The Ground” running when she leads her faithful Welsh entourage The Darling Buds to charge through their adrenalin laced alt-rock.

Ireland’s go-to janglers par excellence The Frank and Walters will be brightening the Manchester skies once again with sunshine soaked repertoire spanning the 25 years – with ‘After All’, ‘This Is Not A Song’, ‘Happy Busmen’ expect nothing else than radiant riffs and chest-swelling sing-a-longs start to finish.

Cud are back for this year’s bill. Staking their place in the proto-Britpop premiership, Leeds four-piece also scored an early fan in John Peel. An unlikely cover of Hot Chocolate’s  ‘You Sexy Thing’ soon won over his listeners when it placed at #20 in his iconic festive fifty and spring-boarding a career that would see the band go on to release classic singles including ‘Purple Love Balloon’, ‘Magic’, ‘Rich & Strange’, ‘Neurotica’ and many more.

Heralding their return to Manchester alt-dance saviours Jesus Jones headline the Academy 2 stage with their complete, original and unadulterated line up. With sensational time-tested tracks in the cannon including ‘Real Real Real’, ‘International Bright Young Thing’ and of course the international super smash ‘Right Here, Right Now’.  Having snapped the legendary outfit up quick for their first and (so far) only scheduled live show of this new year, don’t miss out on your chance to hear the new tracks performed first, not to mention alongside an abundance of classic tracks too for the Gigantic Indie All Dayer Volume 3.

A band whose name has always pre-empted an anarchic live show – S*M*A*S*H – will be rocking up to ruffle a few feathers at Gigantic 2016. Erupting out of Welwyn Garden City with an unholy punk rock racket in the 90s, messrs Borrie, Salv and Hague gained a notorious reputation with likes of feminist anthem ‘Lady Love Your C*nt’, the raucous ‘Shame’ and the incensed ‘(I Want to) Kill Somebody’. Batten down the hatches, lock up your daughters, cover your children’s ears – but by no means miss the trio as they tear up Manchester Academy.

Bringing their exhilarating full live show down especially for the festival, electronic masterminds Bentley Rhythm Ace lead the support for Jesus Jones with a sampletastic set over at the second stage. The duo comprising Mike Stokes and Richard Marsh bounded out of Birmingham in 1996 with debut single ‘Bentley’s Gonna Sort You Out’, a head-zoning track of tranquillising sample-led electronica that emerged in the midst of 90s Big Beat and has since come to define the genre.

Extend your gaze to the Academy stage and you might just feel your senses slip into kaleidoscopic realm of The Telescopes. With the ability to transport audiences into a world of swirling dream pop spires and psychedelic sonic tapestries with trip-tastic compositions like ‘Kick The Wall’, ‘Celeste’, ‘Flying’.

As we all know, indie isn’t so much a sound but a spirit, a way of thinking, a state of mind. And in 2016, to prove exactly that, Credit To The Nation will be joining the Gigantic ranks to show that attitude can always be ramped up louder than any guitar. The conscious hip-hop group fronted by Matty Hanson (a.k.a. MC Fusion) set out to rock the establishment with a sound that combined razor sharp sampling with rap that dealt with Brit-centric socio-political issues delivered with fierce left wing perspective. Whilst, the band has always been proud of its hip hop roots, some of their finest moments have emerged from their keen ability to hear the unheard in the tracks you’ve always known. Prepare to hear Nirvana, Radiohead and more, sampled and transformed by Hanson and the gang during this unmissable 2016 set.

If you’re at all inclined to the sunshine-pop leanings of Brian Wilson, you’ll get good vibrations from BMX Bandits frontman Duglas T. Stewart. He has drawn great inspiration from his south Glasgow home of Bellshill; distilling the post-industrial melancholy into unadulterated indie perfection. Expect a lavish array of instrumentation from this ever changing line up. The Scottish indie rockers joined Creation Records after releasing the exuberant E102. Beyond a wealth of melodically sentient material, the band have two huge citations in the annals of music history; Kurt Cobain wanted to join them – and – Oasis played the first UK tour dates supporting them.

To describe them as seasoned performers would be somewhat of an understatement. Dub-influenced south London squatters Back To The Planet have played four consecutive Glastonbury Festivals as well as a multitude of inner city events like the Deptford Urban Festival. It goes without saying, no all-dayer line up would be complete without the token anarcho-punk ensemble. Self-releasing to success in the esoteric summer of 1993, the band signed to Parallel Records shortly after and released a flurry of stupendous singles like ‘Daydream’ and ‘Teenage Turtles’.  Set apart from the ensuing Brit pop, the group successfully incorporated disparate styles such as ska and reggae into their alchemy.

Giving further reason for you to camp out at the Academy all day for a full marathon of rock’n’roll hedonism, the prospect of a rare appearance from post-grunge noiseniks Bivouac will be more than enough for many. Returning to the Academy to shunt through their first set in 17 years together, expect to hear the very best of their pitch-decimating discography from the Derby trio with tracks from debut LP ‘Tuber and Full Size Boy’ (1995); this reunion is not to be missed.

And last but not by no means least, Jack Adaptor – a self-professed “musical whirlwind of style, intention and lifelong bravado” from the electric mind of Paul Frederick, the former frontman of the much loved garage-rockers The Family Cat. Whilst Paul’s palette may be more diverse under his new moniker, there’ll be no doubting his penchant for killer pop song has never gone amiss through this reincarnation.

As in previous years, from stage to stage, set to set there will be top DJs throughout the day whisking you through 10 hours of uninterrupted classic indie bliss set across 3 stages.

This year will also see for the first time the addition of seminal titles of the silver screen at the fest as it launches its Indie Cinema.

Trusting that indie fans have a taste in beverages as immaculate as their taste in music, no Gigantic Indie All-dayer could ever be complete without the Real Ale and Cider Tent that has made such a splash in former years. Corroborating once again with Robinsons – a brewer and purveyor of some of the finest liquids in the Northwest – the All Day Real Ale & Cider Festival is back for a third instalment. Elsewhere, street food stands will be dotted around the site and selling a wide variety of snacks and meals with the aim of meeting every requirement.

All ages welcome, under 14s must be accompanied by an adult aged over 18

The Wonder Stuff
CUD
The Darling Buds
The Frank And Walters
The House of Love
S*M*A*S*H*
The Annual Gigantic Raffle – get down early and collect your free entry tickets – 3.00pm