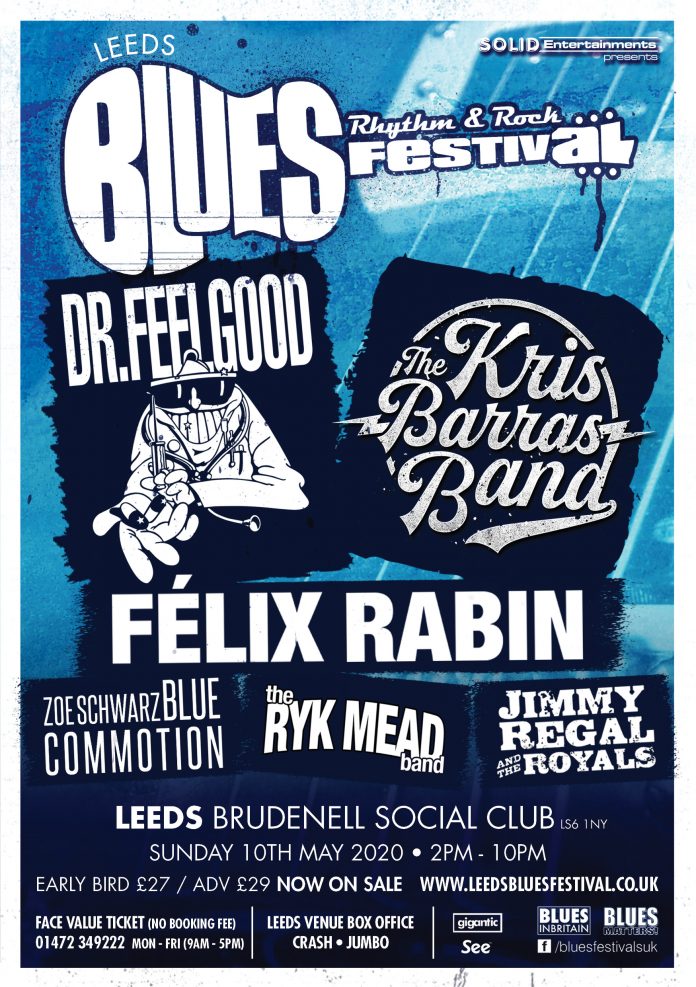 The festival’s  two co-headliners span musical generations; Dr. Feelgood and The Kris Barras Band, plus a rising star from across the channel and three other acts that are determined to leave their own mark on the UK music scene.

Formed on Canvey Island in Essex in the early 1970s, Dr. Feelgood remain one of the most popular and exciting live rhythm and blues acts in the world. The raw and uncompromising style of their performance resulted in the album Stupidity that immediately went to the number one position in the U.K. charts. They have enjoyed global success with a string of hit singles and continue to tour extensively around the World.

UK Guitarist Kris Barras has a genre-defying sound: a high-energy hybrid of no-nonsense Rock, Blues and Country. Winners of ‘Best New Band’ in the 2018 Planet Rock awards, the Kris Barras Band have become one of the UK’s fastest rising acts. Recently voted one of the ‘Top Blues Guitarists in the World’ (Music Radar) and winning the ‘Best Album’ accolade in the European Blues Awards, perhaps best demonstrates the band’s fluidity and appeal to fans of different genres.

Dr. Feelgood – one of Britain’s best loved R&B band, who continue to enthral audiences with the kind of “no-nonsense” live energy that first endeared Dr. Feelgood to a generation of music fans over forty years ago!

Félix Rabin – the French 23 year old singer-songwriter and guitarist was inspired by musicians like Jimi Hendrix, Stevie Ray Vaughan and Pink Floyd; his style embodies these influences and is a must see with his band!

Zoë Schwarz Blue Commotion – the band creates a luxurious and irresistible sound, displaying artistic finesse with Zoë Schwarz’ dynamic and commanding vocal delivery is both eclectic and suave at the same time!

The Ryk Mead Band – blues has always had a deep influence on whatever type of material Ryk has played, although by playing many different styles of music, this is one Power Blues, Jazz, Rock Trio not to miss!

Jimmy Regal And The Royals – a howlin’ blues three piece harmonica, guitar, drums modelled after acts on the Fat Possum label such as RL Burnside, T Model Ford and in the tradition of Hound Dog Taylor and the like!

The Brudenell Social Club is a lively and fun loving venue that embraces music and art under a wide and diverse umbrella that has no boundaries. It is a community ‘non profitmaking’ venue, that holds charitable status, based in Leeds 6 and is owned by its members, run by its members, for its members. It is most famous for hosting secret gigs for bands like Franz Ferdinand and the Kaiser Chiefs. However, it has been a centrepiece of the Leeds music scene for a number of years, and hosts gigs most nights of the week, which are put on by a variety of local promoters

No need to worry about searching for food and drinks on the day either, there will be a range of alcoholic/non-alcoholic beverages, real ales available and a varied menu that should meet everyone’s taste!

Early Bird tickets are now on sale at only £27.00 + bf and can be purchased online at http://www.solidentertainments.com/blues/leeds/tickets.html

To find out more about line up and the festival in general, please visit http://www.solidentertainments.com/blues/leeds/index.html