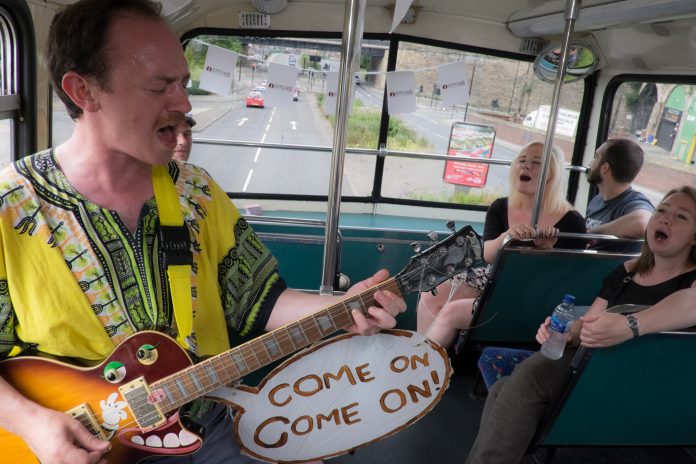 The ‘Hallam Shuttle’ is a new take on the hugely popular moving stage, the Busker’s Bus, which last took to the road back in 2014. A partnership with Hallam University has allowed the return of this moving stage for 2017.

On the Hallam Shuttle, the normally mundane experience of bussing around Sheffield city becomes vibrant part of the festival experience. A bus will connect the main stage at Ponderosa Park with the Folk Forest at Endcliffe Park, running throughout Saturday and Sunday. This bus will include one-off performances from bands and solo acts, programmed and managed by Sheffield Hallam students.

The bus will operate free of charge for anyone with a Tramlines wristband. Full times to be confirmed later, keep an eye on Tramlines social media channels.

During the event, tweet your pictures of the festival using #DiscoverTramlines to appear on the big screens at the main stage. Also, look out for Sheffield Hallam’s festival freebies, a competition to win a pair of Snapchat spectacles.

‘We’re really pleased to be working with Sheffield Hallam again and especially pleased to have the Shuttle bus. We know from feedback that the Busker’s Bus has been missed, and it’s a great opportunity for us to showcase more local talent and improve the festival experience.’ – Sarah Nulty, Festival Director.

The Momentum Music Fund Tent, supported by PRS Foundation is a brand new stage located at Devonshire Green in the city centre. The Momentum Music Fund, which is run by PRS Foundation using public funds from Arts Council England, support from PPL, and is in association with Spotify, offers grants of up to £15k for artists and bands to break through to the next level of their careers. Their stage at Tramlines will feature acts who have benefitted from the fund, all emerging UK artists who have built significant momentum in their careers so far.

On Sunday experimental Bahrainians, Flamingods will take to the stage alongside a DJ set from Nubiyan Twist, the sibling led Cattle & Cane, Jerry Williams and Brighton based Our Girl.

Saturday programming for this area will come from Tramlines with a focus on local and emerging talent.

In addition to their stage, PRS Foundation are hosting a Momentum Music Fund panel at The Foundry on Saturday 22nd July, 12-4pm. The schedule will include two sessions, discussing progression routes, funding opportunities, and tips on how to get ‘Momentum-ready’. Guests will include Momentum funded artist Coco and manager Adele Armitage, representatives from Momentum partners Arts Council England, Sarah Jamieson (DIY Magazine), and Joe Frankland (PRS Foundation).

Into The Trees is an intimate new area located at the main stage on Ponderosa Park. Featuring genre-busting party-starting DJs for those who want to get their dancing shoes on during the daytime.

On Saturday is The Reflex, a disco re-fixer who can claim Noel Gallagher as a fan and has material regularly played on BBC 6 Music by Craig Charles. Also performing on Sat is The Heatwave, a dancehall collective with a London twist on the traditional Jamaican sound. Local support comes from Leroy.

The first, second and third tier tickets for Tramlines 2017 sold out in record time but the fourth release tickets are still available, priced at just £49.50 + booking fee from www.tramlines.org.uk