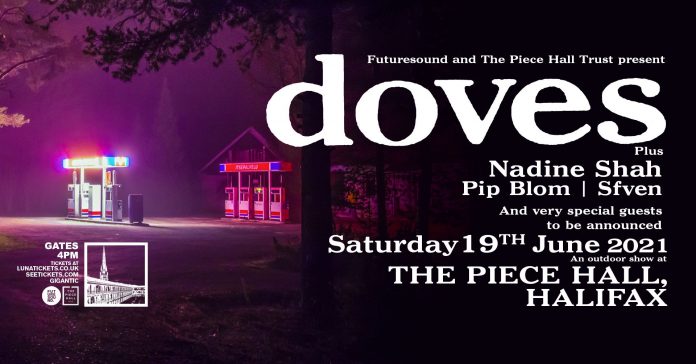 The Live at The Piece Hall series has added a further legendary name to it’s 2021 line-up, as Manchester alternative rock band Doves has been announced to play a special outdoor performance at the Halifax venue in June.

Doves will come to Halifax on Saturday June 19th, following the release of their 5th studio album ‘The Universal Want’ on EMI in September 2020.

After meeting at the renowned Hacienda club in Manchester and forming dance act ‘Sub Sub’ (reaching number 3 in the UK Charts with ‘Ain’t no Love (Ain’t no use)’, Doves surfaced after Sub Sub’s studio burnt down, prompting the decision for Doves to be born as an alternative rock act.

Since that twist of fate, the band have released three number 1 albums, becoming one of the most influential and respected guitar acts of the last 20 years. Combining a blend of indie rock, shoegaze and soundscapes fit for stadiums, Doves have held a place in the hearts of alternative music fans across their increasingly consistent catalogue. After a 10-year hiatus, the band shot to number 1 with ‘The Universal Want’, and this special show at The Piece Hall will form part of a greatly-anticipated return to live music.

Other exciting acts already confirmed for ‘Live at The Piece Hall’ 2021 include the legendary Nile Rogers & CHIC and indie rock heroes The Cribs.

Tickets for Doves plus special guests will go on sale from Seetickets, Gigantic and Lunatickets from 10am on Friday 6th November. The Piece Hall will be running a members pre-sale for 24 hours from Thursday 5th November at 10am.