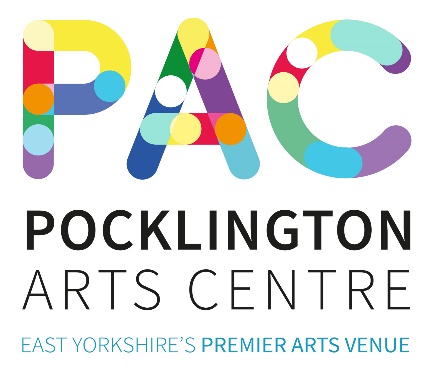 Music listings for Pocklington Arts Centre – please note that this list does not include currently sold-out events. For those checkout the PAC website

Busking-in-the-Bar: Lily Honey
Friday 28 January.
Free entry. Bar open from 7pm, music from 8pm.
Busking-in-the-Bar gives you the chance to experience fantastic free live music from some of the region’s best emerging artists within the comfort of PAC’s intimate & luxurious bar. Lily Honey is a Yorkshire based singer songwriter who also plays piano and guitar. She has performed at venues such as The Fulford Arms and at festivals including Latitude, PAC’s very own Platform Festival and York Food and Drink Festival. Since the August 2020 release of her debut single ‘Leaving All My Love’, Lily has acquired extensive air play including on BBC Introducing.

Herman’s Hermits
Sunday 20 February, 8pm
Tickets £27.00
Herman’s Hermits are one of the biggest selling bands of the 60’s, not just in the UK, but around the world. From their early beginnings in Manchester in 1964, the band have chalked up 23 Hit Singles, 10 Hit Albums, appeared in three major movies and to date they have sold in excess of 75 Million records worldwide. Hits include, There’s A Kind Of Hush, Silhouettes, Can’t You Hear My Heart Beat, Wonderful World, A Must To Avoid, & Mrs Brown You’ve Gotta Lovely Daughter. Enjoy an evening of nostalgia, song and laughter, plus all their Hits brought to life. Please note this event is now taking place on a rescheduled date, as listed, with all original tickets remaining valid.

Gary Stewart’s Graceland
Thursday 24 February, 8pm
Tickets £16.00
Led by the legendary Leeds-based troubadour Gary Stewart (Gary Stewart Band / Hope and Social) and backed his incredible 6-piece band, this spectacular group of musicians come together to recreate Paul Simon’s landmark Graceland album in all its glory. Expect to hear those magical songs, with their captivating stories, distinctive harmonies and South African rhythms brought to life in front of you with no detail spared; from the layers of guitars and percussion, right down to the legendary bass solos and maybe even some token dance moves – if you’re lucky! Let the singing, dancing and nostalgia take hold and pretend you’re basking under the hot summer sun in Zimbabwe.

Friday 25 February
Busking-in-the-Bar: Alice Simmons
Free entry. Bar open from 7pm, music from 8pm.
Busking-in-the-Bar gives you the chance to experience fantastic free live music from some of the region’s best emerging artists within the comfort of PAC’s intimate & luxurious bar. Being compared to London Grammar, Portishead and Florence and The Machine Alice Simmons has created a unique sound combining electric piano, heavy bass lines, delicate guitar and smoky vocals. Alice has played a number of big festivals including Latitude, Humber Street Sesh, and Beyond The Woods.

TOYAH
Thursday 3 March, 8pm
Tickets £25.00
A unique chance to experience Toyah up close and personal with a show that has a lively cinematic sound using Toyah’s vocals/ keyboards/ stand-up bass and storytelling. Featuring her beloved hit singles and classic songs, alongside stories from her colourful, forty-year career. Toyah will perform stunning arrangements of hits including It’s A Mystery, Thunder In The Mountains, I Want To Be Free and Good Morning Universe alongside modern day classics such as Sensational and Dance In The Hurricane. Toyah’s brand new album ‘Posh Pop’ will be released this autumn and she can currently be seen in her hugely popular Sunday Lunch videos which have amassed viewing figures of over 10million with her husband Robert Fripp.

David Ford
Thursday 10 March, 8pm
Tickets £16.00
Award-winning songwriter David Ford returns to the road with an album of songs documenting the tumultuous year that was 2020. May You Live in Interesting Times is Ford’s sixth studio album and one that charts the rise of Covid alongside the decline of Trump. Recorded at home during the various stages of lockdown, the album captures the moment with Ford’s trademark blend of emotional eloquence and dark irony. After the imposed hiatus, this new incarnation of Ford’s innovative and ever-changing live show, described by The Times as, “One of Britain’s best”, promises to demonstrate just what happens when you shut a creative force in a room for two years.

Busking-in-the-Bar: Tim O’Connor
Friday 25 March, 8pm.
Free entry. Bar open from 7pm, music from 8pm.
Busking-in-the-Bar gives you the chance to experience fantastic free live music from some of the region’s best emerging artists within the comfort of PAC’s intimate & luxurious bar. Tim O’Connor is regarded as a troubadour for the 21st century with an eclectic musical melting pot of songs. His music is influenced by a myriad of musical styles woven into insightful, heartfelt contemporary yet age old sounding songs, drawing influence from The Beatles, Bob Dylan, Van Morrison, Tom Waits, Jonny Cash, and traditional Irish music.

Edwina Hayes with special guest Rachel Croft
Friday 1 April, 8pm.
Tickets £13.00
Edwina’s beautifully written songs, charming stage presence and voice of an angel have won her a reputation as a true natural talent of gentle folk-Americana. Her cover of the Randy Newman song Feels Like Home was featured in the Cameron Diaz film My Sister’s Keeper and has since had over a hundred million plays on YouTube. Featured on prime time BBC 2 television, Rachel Croft is a Nottingham-born, York-made singer songwriter with a voice described as “truly exceptional” by BBC Introducing. With her rich lyricism and blend of cinematic rock, soul and indie styles, Rachel has gained an impressive international fanbase, packing out venues across Europe and gracing the main stages of festivals including Wickham, Lindisfarne and Costa Del Folk Portugal since 2017.

John Smith
Tuesday 5 April, 8pm
Tickets £15.00
Raised by the Devon seaside and making his bones in the bars and clubs of Liverpool, John has released five albums with over 40 million Spotify streams. He has played to audiences all over the world in living rooms, festival tents and sold-out concert halls. As a session musician, he has played guitar with artists as diverse as Joan Baez, David Gray, Joe Henry, Lianne La Havas, and Tom Jones. His latest album, The Fray, was released to critical acclaim in March 2021. Please note this event is now taking place on a rescheduled date, as listed, with all original tickets remaining valid.

The Young’uns
Saturday 23 April, 8pm
Tickets £19.00
The Young’uns’ live shows are renowned roller coaster rides. With heart-on-the-sleeve storytelling, beautiful lyrics, warm harmonies and relentless repartee, Sean Cooney, Michael Hughes and David Eagle (the award-winning stand-up comedian) write and sing folk songs for today. Born from empathy, crafted with care, fired by hope, and shared with joy, The Young’uns’ songs have been described as ‘a heartfelt secular hymnary for these troubled times and a rallying call for humanity’ (The Scotsman). They have led the band to three BBC Radio 2 Folk Awards (including Best Album in 2018 for Strangers) and the creation of the acclaimed international theatre show The Ballad of Johnny Longstaff (based upon their 2019 album of the same name).

Sean Taylor
Thursday 28 April, 8pm
Tickets £12.00
Sean Taylor’s unique song-writing fuses blues, Americana, folk, roots, spoken word and social commentary. Over the last twenty years he has toured the world and released eleven albums. The Sean Taylor sound is a late-night cocktail of Tom Waits, with the voice of Van Morrison and a guitar style of John Martyn … His live shows feature world class song-writing with stories from the road. Promoting his new album ‘The Beat Goes On Sean Taylor is one of the most exciting and hard working names on the international roots and blues circuit.

The Felice Brothers
Thursday 23 June, 8pm
Tickets £20.00
The Felice Brothers’ distinct brand of song-writing and lawless sound has earned them comparisons to Neil Young, Bob Dylan and James Brown. Self-taught musicians Ian and James Felice began playing subway platforms and sidewalks in NYC, in 2006, and have gone on to release nine albums of original songs and to tour extensively throughout the world. Their album ‘Undress’ was released last year to critical acclaim and they will be performing songs from this and their extensive back catalogue accompanied by Will Lawrence (drums) and Jesske Hume (bass). Please note this event is now taking place on a rescheduled date, as listed, with all original tickets remaining valid.

Jesse Malin plus support
Wednesday 29 June, 8pm
Tickets £17.50
Jesse Malin made his name as a thoughtful and introspective singer/songwriter but also played raucous, over-the-top rock & roll with the band D Generation. Malin has recorded with Bruce Springsteen and Green Day, performed on The Tonight Show and Letterman, and shared stages with everyone from The Hold Steady to Bob Weir and The Gaslight Anthem. A prolific writer and relentless road warrior, he continues to circle the globe with his band and in 2019 released his seventh studio album, produced by American roots icon Lucinda Williams.

The Delines plus support
Wednesday 13 July, 8pm
Tickets £20.00
Country-soul outfit, The Delines come to PAC as part of a European tour in February 2022 with support from Jerry Joseph. The Delines sold out their last UK tour and will be returning with new material for this special date with the full line up. The band hails from Portland, Oregon where they have been working on new material over the past months before the lockdown, which is set to be finished shortly. Look forward to new songs and older classics from their previous albums. Please note this event is now taking place on a rescheduled date, as listed, with all original tickets remaining valid.

Bootleg Boss
Friday 29 July, 8pm
Tickets £20.00
Bootleg Boss are a UK based seven-piece band that perform the classic songs of Bruce Springsteen & The E Street Band. Formed in 2012 this accomplished and exciting Live Band feature Kev Jamieson as the vocal-singing, guitar-playing, harmonica-blowing, band-leading, audience-engaging, dance-inducing, singalong-inspiring Boss. If you were born to run down backstreets, across badlands and to go dancing in the dark in a brilliant disguise, Bootleg Boss is the band you need to see.

Loudon Wainwright III
Wednesday 7 September, 7.30pm
Tickets £44.00
For the past 52 years, Loudon has carved out a distinguished career as one of our most original singer-songwriters, a six-string diarist with material that is by turns, tongue-in-cheek, tender, sarcastic, heart-wrenching and always deeply personal.
Along the way, he’s released over 20 albums, won a Grammy, acted in film and TV, and had his songs recorded by artists including Johnny Cash, Mose Allison, Bonnie Raitt, and his own son, Rufus Wainwright. In October of 2020 Loudon unveiled the album “I’d Rather Lead A Band” in which he is featured as a vocalist with Vince Giordano and The Nighthawks. Please note this show will now be Loudon, solo, and not feature Suzzy Roche and Lucy Wainwright Roche due to a scheduling conflict. This show is taking place on a rescheduled date, as listed, with all original tickets remaining valid.