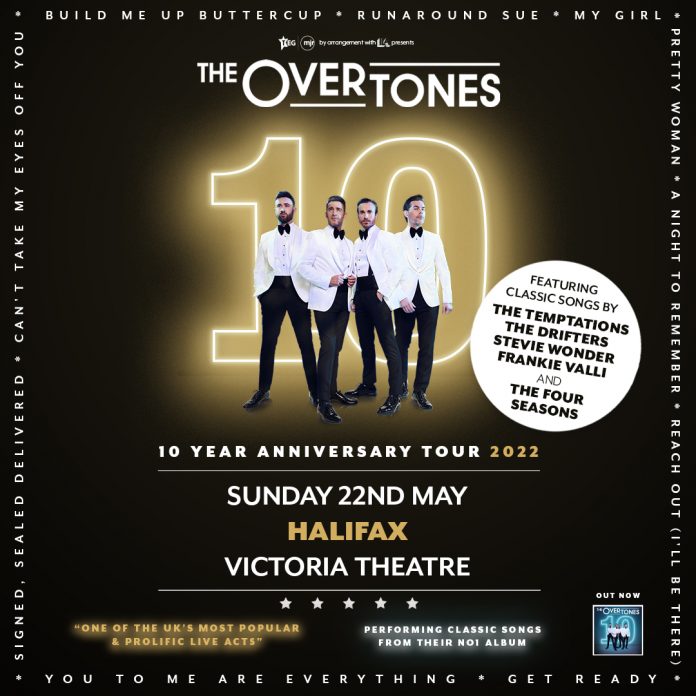 Vocal harmony group The Overtones will be opening their 10 year anniversary tour at the Victoria Theatre on Sunday 22 May 22, with a back catalogue of their best hits over the past 10 years. Since bursting onto the UK music scene ten years ago, The Overtones have racked up platinum record sales, released 6 studio albums and sold out tours across the nation. They also performed for Her Majesty The Queen – firmly establishing them as one of UK’s most popular live acts best known for their exquisite vocals and distinctive style.

Despite previously headlining some of the most prestigious venues including The London Palladium and The Royal Albert Hall – and achieving standout performances at Buckingham Palace for the Queen’s Diamond Jubilee and singing to one million people at the Brandenburg Gate in Berlin – The Overtones feel there’s still so much more to achieve and plan to mark their tenth anniversary by making more memorable moments during 2022.

Mark, Darren, Jay and Mike have mastered the perfect mix of originality with classic nostalgia and combined with their charm and perfectly timed dance moves – and of course their perfectly pitched harmonies – their effortless performances and style have helped deliver their sell out successes across the globe during the past decade.

Having experienced loss, parenthood and a new line up during this time, the multi-talented awesome foursome have never been closer and continue to perfect their craft for their adoring fans.

In 2019 the group welcomed new member, Jay James – who also became a household name after working with musicians like John Legend and becoming a finalist on The X Factor – and saw the start of an exciting new era for the boys who went on to sell out their 10th consecutive UK tour.

Speaking about the 10th anniversary of the band, Jay says “2022 is all about bringing back the feel good and that’s what The Overtones do best. As we celebrate the past, dance in the present and sing for the future, we are so excited and blessed to give The Overtones family their best night yet!”

Like many other acts, the last 2 years have meant cancelled tours and releases for The Overtones, but with a newly recharged band and an excitement of what’s to come in their anniversary year, the group can’t wait to be back on the road in 2022. Mark Franks said, “We can’t wait to finally get to sing, dance & party together with you all, in 2022, on our 10 Year Anniversary Tour. It’s been a long time coming and there really ain’t no party like an Overtones party!”

Tickets for this show are available from £28.75. Purchase tickets online, www.victoriatheatre.co.uk, or by calling the Box Office on 01422 351158