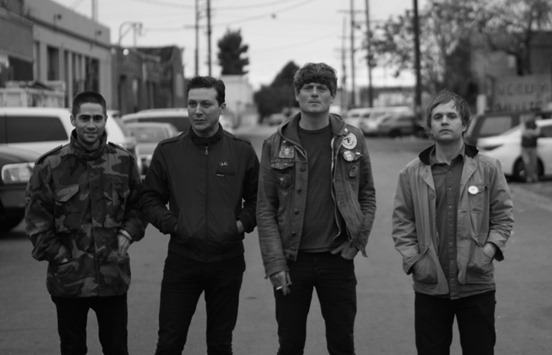 Transformer, the Manchester series of alternative-live music events, is thrilled to announce that Los Angeles four-piece Thee Oh Sees will headline its sophomore show. Taking place at Manchester Academy on Wednesday 14th June, the experimental rock outfit will receive support from fellow San-Fran supergroup, The Peacers, together creating a bold and energetic soundtrack to stir up the Transformer masses. Tickets are now on sale for £21 plus booking fee from www.skiddle.com/e/12902349

Launched in late 2016 by the in-house team at the iconic Victoria Warehouse, Transformer pays homage to Lou Reed and his visionary approach to rock, both in the Velvet Underground and on albums like Metal Machine Music. On Bank Holiday Sunday 28th May, just two weeks prior to Thee Oh Sees event, Transformer will host its debut, indoor festival at the Victoria Warehouse featuring the already-announced Swans, The Fall, Royal Trux and This Is Not This Heat. Previously host to events for the likes of BBC 6Music, Live Nation and SJM Concerts, the Victoria Warehouse is excited to take Transformer a few miles across the city to the Manchester Academy with its next avantgarde lineup.

Leading the all-American lineup on 14th June is the ever-evolving garage rock group, Thee Oh Sees. Led by the acclaimed singer / songwriter and guitarist John Dwyer, and key player in San Francisco’s 90s indie scene in bands such as Coachwhips, Pink & Brown and OCS, this live performance by Thee Oh Sees marks the only northern leg in their 2017 UK tour. The indie-rock outfit – who were voted in Paste Magazine’s Top 10 Prolific Artists of the Decade – are primed to bring jangled, guitar-driven rock to the stage at Transformer.

Opening the show from 7pm is The Peacers, the San Fran-based super-group comprising of Mike Donovan (Sic Alps), Mike Shoun (Thee Oh Sees), Shayde Sartin (Fresh & Onlys / Sonny and the Sunsets) and Bo Moore (Bozmo). It was Donovan of the noise band Sic Alps that first brought The Peacers together, and the timing of the band’s arrival at Transformer couldn’t have been better timed, as their new LP on the Drag City label lands in spring 2017. Expect psychedelic pop and more from the diverging avenues of The Peacers’ garage rock.