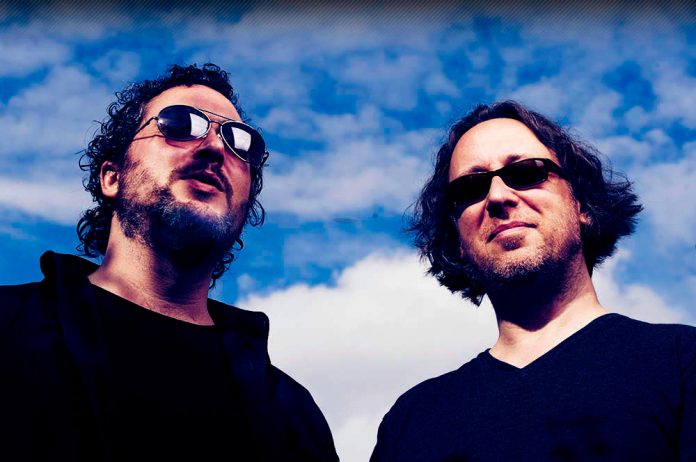 First an introduction, when I was contacted by Rob (Cohen) I had originally planned an album review with a bit of an introduction to the band for those of you who haven’t heard of them. When I listened to to some of the material I was so impressed I wanted to know more about them. An album review will follow soon I promise.

WildCohen make music the like of which I have not heard for years. It’s psychedelic – huge and vastly layered. And it is, to my ears at least, different to some of the bands that are labelled as psych, drawing influences from all sorts of music.

Plus, and this is a huge plus for me, they’re not afraid to vary their sound from track to track. I had to reach way back to find something that hit that mark quite as well – for those of you that are interested that was ‘The Family That Plays Together’ by Spirit. I was also reminded in places of the The Dukes of Stratosphear’s ‘25 O’Clock’ an album that I considered to be a classic during my formative musical years. Having said that, and before you write them off as being purely retro, their overall sound is not only very much their own but is bang up to date.

Now, I think, would be a good time for you to listen to some music before we go on

I was also intrigued – to say the least – by their description of the album as being a concept album ‘about the spiritual mother of all universes’. So I had a lot to ask them about. So I pinged Rob some questions and he was good enough to answer them.

For those of us who don’t know anything about you, how did WildCohen get together?
I personally think it was a bit of a happy accident, I knew Jody from years of being in bands in and around Sheffield, back then he was playing with the Various Vegetables, and I was in Marmalade Sun, our path’s crossed on many an occasion, busking and gigging etc, then Jody then went on to put out two brilliant solo albums (backed by a band) on Sketchbook Records, under Jody Wildgoose – check out ‘Lovely White Teeth’ and ‘Afterlife’ amazing albums – and I became a fan of what he was doing, and saw a lot of his gigs, and thought it was kind of similar to what I was trying to achieve, but not quite managing to get it how I wanted, Jody heard a few demo’s I had been doing, and said he would like to produce and work with me as a side project, so he kind of took it all apart, and put it back together again, like a sound mechanic, and the results blew me away, so that is how I remember it starting about 2 years ago!

We are both multi instrumentalists, but I tend to write more lyrics and basic structures, and Jody does all the clever stuff I can’t do, he has a real ear for song Layout / Structure / Layers and Production that is beyond me, but he has been teaching me that side of things as we go along.

Did you come together to make this sort of music or did it grow out of your shared influences?
We have a lot of cross pollination points where we meet, I think I might have been quite influenced by Jody’s albums I am a bit a sponge like that I take everything I hear and it filters through into something totally different, but yeah, we have very similar influences, but Jody introduced me to things I hadn’t really heard before like WEEN & Primal Scream, I might have even played him stuff he hadn’t heard, but it is hard for me to work out with what we do, what is Jody and what is me these days as it kind of just really yin and yang’s together into what I guess is our sound!

Talking about influences, I hear a lot of sounds coming from 60’s psychedelic music, is this something that influences you and if so who?
I think that is both of us, I started out raiding my dads and uncles record collections, listening to classic Pink Floyd, Beatles, Led Zeppelin, Hendrix, Rolling Stones, Bob Dylan, Donovan, Bowie and T-Rex and pretty much anything I could get my hands on, there was a wealth of great albums from the 60’s and 70’s.

It was like finding a pot of gold in the cupboard, and at the time it was a bit weird, because I was listening to all this classic old stuff from about 8 years old, and the Thompson Twins we’re singing ‘Doctor Doctor’ and I just didn’t get what was happening in the late 80’s.

I also get quite a lot of hints of 80’s stuff coming through – Primal Scream comes to mind (and even Deee-Lite to my ears) plus some of what I might call the 80’s New Paisley Underground bands, do you reach back to there for influences?
I am not sure where the 80’s thing comes from, as I didn’t really get on with anything in the 80’s, there was the odd classic band like The Cure, but it was a bit bad for me at the time music wise, I have got more into 80’s music recently looking back at it, but at the time, I just didn’t get it, I think Bowie was about the best for me at that time, and Prince in his Raspberry Beret, around the world in a day period. And Jody is well up on Primal Scream and punk low-fi stuff, I listen to a lot of dance based music, or I did throughout the 90’s, and I was a big fan of Nirvana and the grunge stuff from the 90’s also, so maybe its all parts of everything leaking through.

Even though I hear a lot of influences – and what music doesn’t have influences – as a whole the music you make sounds very much your music, is there one thing (or even more than one thing) that you think makes it yours?
Not sure what it is that makes it ours, I guess it is just the combination of influences mixed with life experience, I tend to write about what is happening at the time, right now I am a bit obsessed with time travel, space and alternate realities and concepts that are other worldly things, I stopped watching TV about 2 years ago, and all I watch now is Youtube, but you do tend to end up in the dark side of the web sometimes, you can start off watching the big bang and how the universe started and end up watching something about the mandela effect, and then your onto alien conspiracies but, to be honest I am not sure if any of it makes any sense, but I do like anything that opens your mind up, to other possibilities, I am sure not everything we are spoon fed is true, there seems to be as much disinformation as information, but, it is always good to keep an open mind!

Do you see your music as being separate from the current wave of psych bands (who to my mind filter their music through Indie in a broad sense), even though you probably share some influences?
I am not sure, I keep hearing people saying ‘New Wave of Psychedelic’ about us, and certain bands around like Tame Impala, Foxygen, The Moonlandingz, Temples, Lemon Twigs and GOTSTT, I am not sure we sound like any of those, but I guess the influences are there, there has been an explosion of music that I like again over the past 2 years, I guess its just a bit of a coincidence, but I love some of the bands that I found last year, 2016 was a great year for music, some really amazing albums recently, that remind me of a time when people made, records that are more than processed sugary kind of stuff that dominates mainstream charts, things are changing not just musically but politically.

I love that your album features a range of styles of music, was this a definite choice or just a happy accident?
Cheers, I personally am not keen of albums that sound the same from start to finish, with one ballad somewhere half way through the album, I think the 80’s has a lot to blame for that, I am not keen on music being almost automated, I watched a TV show the other night about a guy who had wrote some software that could write a hit song, although the outcome was, that is couldn’t, I don’t think you can force something, all the best things are accidents or naturally occurring, which I think is true of some of my favourite bands, lets face it what are the chances of the Beatles meeting in the same city and forming a band? but it happened, without being forced! I think the Monkee’s are the only exception to the rule!

You describe the album – ‘BloochyKoo’ – as being a concept album ‘about the spiritual mother of all universes’, could you expand on that for our readers?
I have forgot how it all started, but Jody wrote an unreleased song called ‘God in the Sky’ which must have subliminally influenced me (maybe I nicked the idea subconsciously).

I had a dream around the time of first starting this project with Jody, that I meet an all seeing, all everything being, a female god, of everything the mother of all evolution, all universes and time and all that is, and I was asking her about what is the meaning of life, and why are we here, and from that dream I wrote ‘The Light of the World’ which kind of sums up my dream, but the whole album has this and various concepts running through it, with added parts of Flat Earth Theory / Sumerians / Planet X (Nabiru) Jacksons Sun / Anunnaki / Aliens / Fate / Destiny and the Signs of End Times. I am not sure if that explains it, but that is how it came about, but it is hopefully a journey from start to finish, that opens up doors of perception and ideas! lyrically and musically.

What now for WildCohen – Upcoming new material, gigs?
I don’t really want to say too much about anything right now, as we are still promoting ‘BloochyKoo’, but there are irons in the fires and there are things in the bag, as they say, all I can say, is if anything of this interests people and they want to know more about what comes next, then head over to our main website www.wildcohen.co.uk and join our mailing list, as we will be announcing things later this year, sorry to be so vague, but more coming soon as they say!