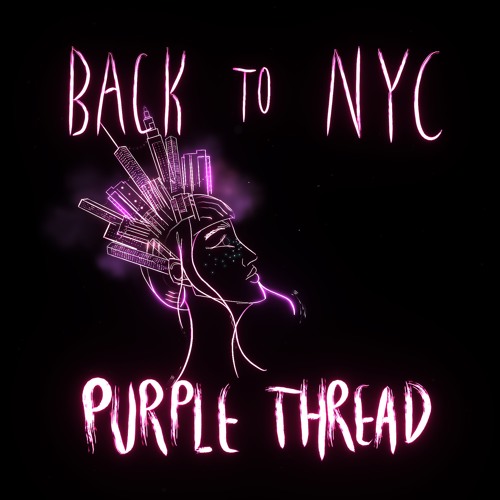 This track is one that Purple Thread have been including in their sets for a while now, and it’s become something of a live fav for me. I’m fairly sure – may I struck down with a thunderbolt if I’m wrong – that the band included it in their stripped back acoustic set at Shuffle Shuttle.

Live it’s a raucous thing, but would this be the case with this the single. Well yep, it is raucous. But it’s also rather cleverly put together. It sounds like two parts Patti Smith and one part Blondie, with odd hints of The Ramones and The New York Dolls, and a hint of disco right at the start (prizes will be available for anyone who cam identify where that sound comes from, not real prizes you understand, just the self-satisfaction of knowing it OK). It does that NY Punk/No Wave thing. You get what the band are doing here, don’t you?. While this sounds like I’m saying it sounds exactly like the bands I mentioned, it doesn’t, it still sounds like Purple Thread, it has their sound. It has that sudden Purple Thread guitar freakout, and that Liz ‘range of vocal styles’ thing.

So enough of the overly analytical music reviewer thing, I hear you say, tell me what this thing feels like and what it does to you. Well right from the start it makes you feel good, way fucking good people, and it makes you feel like throwing yourself around the room, violently throwing yourself around the room with scant regard for the safety of limbs and any cat in range (My cat Maisie – aka Maisie the LSF cat, aka Priddy Cat – was rather startled by the rather out of control way I thrashed around the room to this).

Look I can be accused of being a fan of Purple Thread, that’s OK I am, and that it appears that I praise anything by them to high heaven but please believe me when I say this is absolutely fucking fantastic. There’s nothing I would change to make it better, it’s perfect as it is. You know what I’m going to say, don’t you? Get to it, turn it up loud, and get loose people.