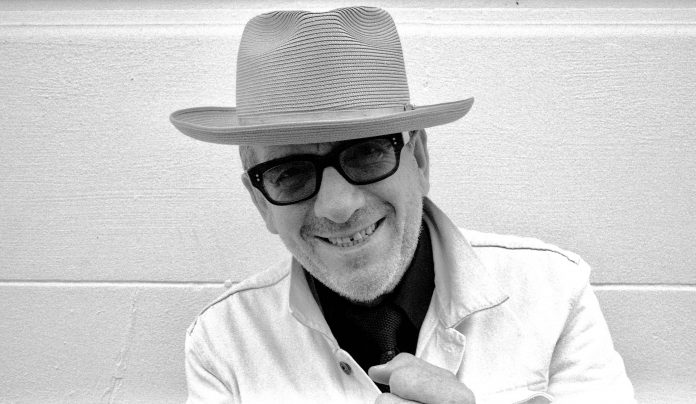 Elvis Costello and The Imposters bring their new show to the U.K. in February/March, 2020. Tickets On-Sale this Friday September 20th.

Elvis Costello and The Imposters will bring their new show to the U.K. for their first tour of the decade in February and March, 2020.

The tour is entitled, “Just Trust” in answer to the musical questions: “Will they play my favourite song?,” or, “Are they going to frighten the horses with songs that are rarely performed and send some of their old nags off to pasture?” When ticket holders ask, “Can I expect the hits of yesteryear and those of tomorrow?” We say: Just Trust Elvis Costello and The Imposters.

This superlative ensemble – Steve Nieve on keyboards, Pete Thomas on drums, and bassist and vocalist, Davey Faragher – are once again augmented by singers Kitten Kuroi and Briana Lee, all of whom were heard on the acclaimed 2018 Concord Records release, ‘Look Now,’ numbers from which will find their rightful place among the highlights from one of the most unique and renowned song catalogues in popular music.

E.C. and The Imposters finally get to bring one of their recent stage shows to England, Scotland and Wales, with return concert engagements in Cardiff and Edinburgh, which they visited as recently as the summer of 2018, while the date at the Sunderland Empire marks the first appearance in the city for forty years.

The tour opens on February 28th at the Eventim Olympia in Liverpool, a former circus on the West Derby Road and therefore on the singer’s bus route home from school during his years living on Merseyside.

The tour comes after a season of unlikely accolades in which the now defunct British Empire finally acknowledged a member of the enduring MacManus Clan with a medal that both friends and detractors have assumed stood for the “‘Orrible Bloody Elvis” medal and in the same year in which Costello received a Hollywood Walk Of Fame Star alongside Spike Lee, Billy Idol, Burt Ward and his former video co-star, Julia Roberts and following in the footsteps of Fred Astaire, Ruby Keeler and Rin Tin Tin, among many, many other stars of stage, screen and the radio airwaves.

Elvis Costello and The Imposters most recent record release was the E.P., “Purse” containing songs co-written with Burt Bacharach and Paul McCartney along with musical settings of words by Johnny Cash and Bob Dylan. It is available from all reputable phonographic emporiums or if you go fishing in the stream.

Tickets are on-sale this Friday September 20th at 10:00AM local time.