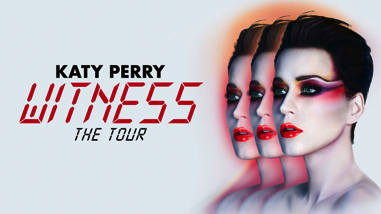 WITNESS: The Tour comes to the UK in June 2018 with tickets on sale 9th June. Her new album ‘WITNESS’ set for 9 June Worldwide Release

Tickets for the UK Tour go on sale Friday, 9 June at 9am BST via KatyPerry.com and www.axs.com. See below for itinerary or visit http://katyperry.com. For more information, visit www.aegpresents.com.

WITNESS: The Tour is Katy’s first run since the sold-out, 151-date Prismatic World Tour, which concluded in 2015 and was hailed by Rolling Stone as “a show to damage retinas and blow minds”.