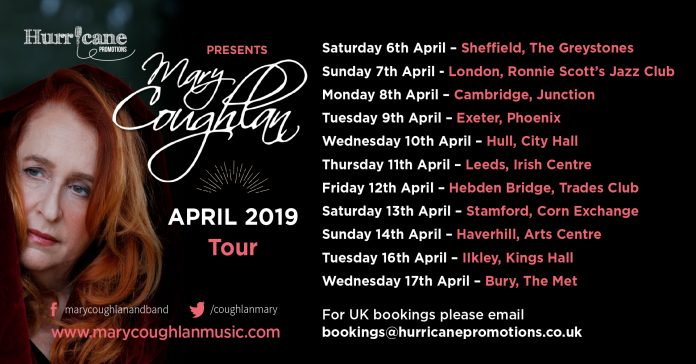 Mary Coughlan, one of Ireland’s greatest female jazz and blues singers, is set to embark on a 11 date nationwide tour in April 2019. This follows the sell-out success of her acclaimed autobiographical theatre production, Woman Undone, staged at the Project Arts Centre, Dublin in November 2018 and will be preceded by an an extensive tour of Australia in February and March.

Described as “Ireland’s Billie Holiday’” Mary has overcome childhood trauma, alcoholism & drug addiction to become a musical force like no other. “Her life story gives weight to the truth that the best singers are the ones with the most painful lives” (The Guardian).

Her seminal first album Tired and Emotional rocketed her to overnight fame in 1985, and fifteen albums later, her ability to deeply connect with both the song & her audience remains undiminished, a testament to her inner strength and to the power of transformation & redemption. Mary live is in a league of her own, her glorious husky voice pulling every ounce of emotion from the music. As the Observer rightly said, “Mary Coughlan’s talent is awesome” Resonant with the grief of Billie Holiday, the soul of Van Morrison and the defiance of Edith Piaf, to hear Mary sing is to be at the core of the human heart.

Her smoky, bluesy, boozy drawl has always been a seduction, no matter what the subject. The vocal marrying of sardonic wit, visceral rage, orgiastic between the sheets passion, the tenderest of sorrowful regrets; this is Mary’s talent. Regardless of the elements she chooses to manipulate with flawless ease, Mary’s voice has always been an unforeseen, sudden seduction. This is why she is so loved.