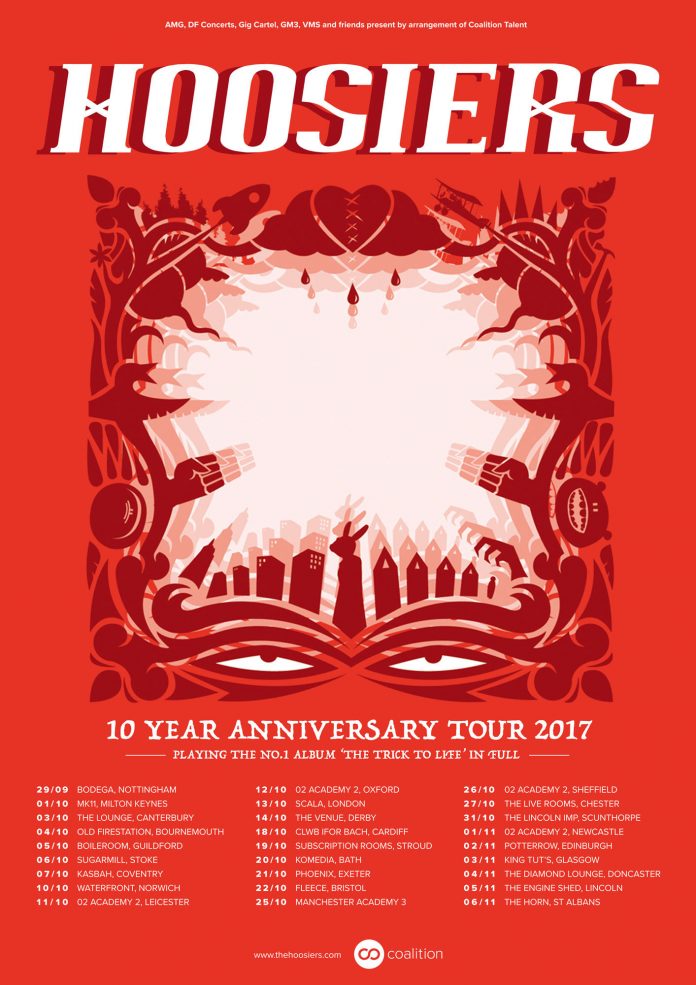 2007 saw The Hoosiers explode upon an unsuspecting public with their debut album “The Trick To Life”, which reached the top of the album charts and spawned the indie-pop classics ‘Worried About Ray’ and ‘Goodbye Mr A’, which still pack out indie dance floors a decade later.

Never released on vinyl, the band will be selling a new limited edition vinyl pressing and expanded 2CD edition of their debut when they undertake a huge UK tour that will see them play the album in its entirety, something they’ve never done before.

The multi-platinum success of their debut album raised huge expectations for its follow-up, not least at The Hoosiers’ record label. The prophetically titled “The Illusion of Safety” was, all the band agree, a troubled project from the start. Irwin suggests, “The word ‘hit’ is substituted for ‘good’. There’s an art to writing under those conditions, but it wasn’t one that worked for us. It exacts a toll on too many writers. You give up too much if you do that.”

“The News From Nowhere”, released in 2014, was an astonishing return to form along with 2015’s “The Secret Service”, both self-released after the above troubles with labels. “Doing it on our own terms,” says Irwin, “and actually having a proper say in it, felt wonderful. We had nothing to lose, but a lot to prove.”

Tension, creativity, democracy, arguments, time apart, coming back together, and then songs. Lots of them. Gone is the self-consciousness of the dog days around their second album; gone, too, the self-doubt. In their place is a deeply rooted – and hard-won – confidence, and a determination to lock back in to the freedom and joy of the early days.