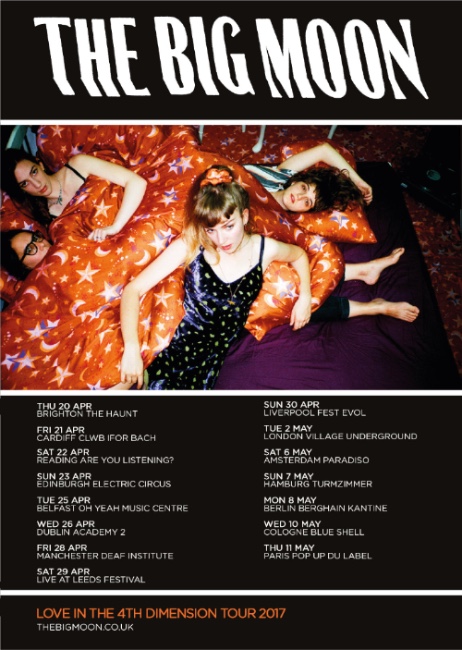 Directed by the band’s long standing collaborator, Louis Bhose. The video was filmed in the heart of the British Peak District.

The Big Moon say: “Formidable is a song that’s important to us all and it felt like for once, it wasn’t appropriate to make a mega fun, LOLZ video. That said, we didn’t want to make a super earnest band video either. We had a day off in between cities on our autumn tour so we drove to the beautiful Peak District and smashed out the song in the back of the van. It’s a van that we’ve spent more time in than our own beds over the last year. The wonderful Louis Bhose was once again the creative visionary at the helm of this video. We hope you like it”

The Big Moon recently concluded a UK tour and are now on a US tour alongside The Japanese House. To coincide with the new album news, The Big Moon are pleased to announce details of a ten-night run in Spring 2017 – starting in Brighton on the 20th April and concluding in London on the 2nd May at Village Underground.

‘Love In The 4th Dimension’ will be released digitally, on CD, and on heavyweight vinyl. Signed copies of the CD, vinyl and limited edition polaroids will be exclusively available to fans through The Big Moon online store. www.thebigmoon.co.uk.