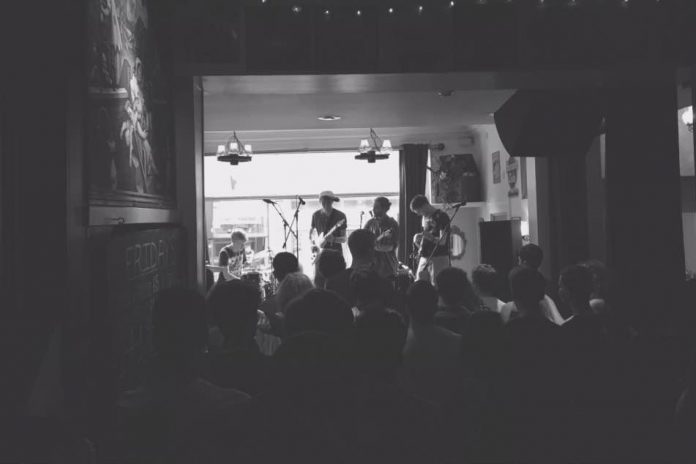 Starting The Life Aquatic Band has let Ben Allen to jump back in to what he loves doing. Having left his previous band, The Native, when he came to study in Sheffield.

“We started with folk because it’s easy to lay something down with your guitar and play it with someone else”, he tells me, sitting in a student cafe in the University of Sheffield. Next to him is Ford Collier, fellow member and guitarist of Life Aquatic Band. Listening to his earlier demos on sound cloud, I can see what he means. ‘Political song #1’ features Ben singing whimsically about immigration over his acoustic guitar, Billie Bragg style. “I’m waiting for the day when your racist joke goes down like a lead balloon/but you bred it into your children too/ so it won’t die a death too soon”.

Ben’s list of early influences is what you’d expect from a folk musician- Bob Dylan, Laura Marling, Nick Drake. “In [Ben’s] songwriting I hear quite an American sound” says Ford, referencing ‘Michigan, I’, one of the Native’s songs. “I’ve never been to Michigan, probably never will, it’s just a really nice word to sing”, Ben explains, “American music has a massive influence on me, I don’t know why. I’m a big fan of anything that comes out of New York, any genre”.

Wanting to increase the potential of his music, he recruited Ford Collier on guitar, Jonny Poole on drums and Ben Evans on bass, starting the Life Aquatic Band (LAB). He explains his desire move away from folk guitar singing- “I’ve always preferred band music, soul music especially. It’s a wish for me to stop playing guitar and just be the frontman, leaving the guitars to play more complex, exciting rhythms”. In this funkier genre, Ben likes LCD Soundsystem and Talking Heads. I ask him how he came up with the band name: a reference to the 2004 Wes Anderson film. “I’ve got an obsession with the sea, sea life, and Bill Murray… I’ve got a colouring book of just Bill Murray things”.

Working with drummer / producer Jonny Poole, they released ‘What’ll Be’ and ‘The Fault’. One of Poole’s other bands, Monster Florence, is worth a mention, showcasing the groovy soul feel Ben aspires to. I’m especially enthusiastic about the Life Aquatic Band’s latest release, ‘The Fault’. The energetic guitars and warm strings are complemented by Ben’s carefully crafted lyrics. “I do a lot of poetry so lyrics are really something that I pride myself on”, Ben explains. “’The Fault is really about mental stigma and misdiagnosing someone with mental issues that they may not have.” He explains about friends who have been diagnosed with depression and prescribed redundant medication. “Don’t medicate my mind/ It’s really not my time”.

Having performed at Sheffield venues The Harley and most recently in The Old House for Tramlines festival, LAB are looking to work with fellow Sheffield student band Floodhounds for future gigs later this year. Alongside this, and finishing their final years of university, they’re hoping to record an EP. “We’ve got a lot of grunge mixed in with funky music.” I’m intrigued by the idea. Ford elaborates: “It’s definitely eclectic in that it’s focusing towards soul music- funky beats and rhythms.” Ben continues: “The one thing I want to do is make fun music that people can dance to, I’m so used to playing on my own or without a drum kit. I just want to play something with a beat or funky rhythms. Playing live is definitely one of our strong points, when we get a crowd they definitely enjoy themselves”.

Having recently got back into the recording studio, Life Aquatic Band are hoping to release a track by the end of the year, and their EP in early 2017.