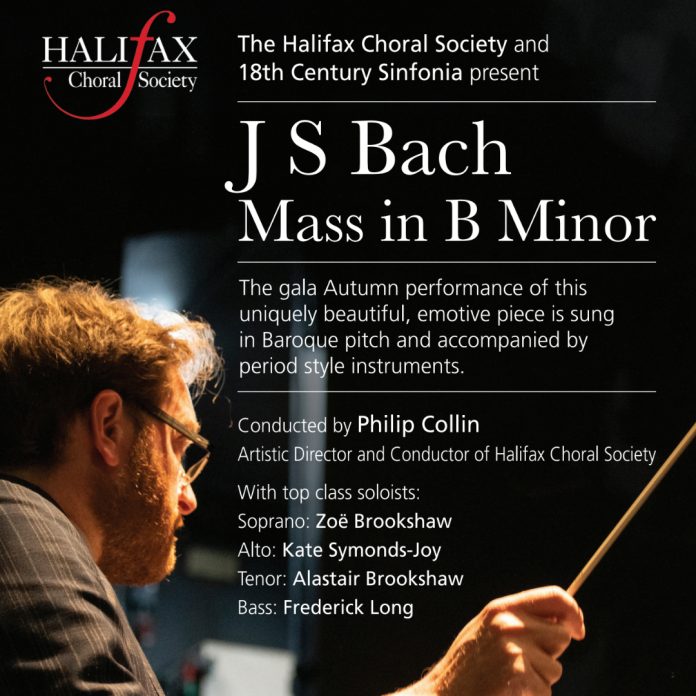 The Halifax Choral Society and 18th Century Sinfonia will be presenting J S Bach: Mass in B Minor at the Victoria Theatre Halifax on Sunday 30th October at 6:30pm.

The Mass in B Minor is a monumental work and the consecration of a whole life. It is a choral masterpiece that is a synthesis of every stylistic and technical contribution the Cantor of Leipzig made to music. This gala autumn performance will be conducted by Philip Collin: Artistic Director and Conductor of Halifax Choral Society and will feature world class soloists: Soprano Zoë Brookshaw, Alto Kate Symonds-Joy, Tenor Alastair Brookshaw and Bass Frederick Long.

One of the Baroque period’s most celebrated choral masterpieces, and indeed of all classical music, Mass in B Minor (1733–38) was JS Bach’s last major work before he died. It was never intended to be performed as a whole within the liturgy, and its various movements date from different periods of Bach’s life. Bach actually never heard the Mass performed in its entirety and it wasn’t until 1859, more than a century after Bach died, that the entire work was performed as a whole piece.

This two-hour Baroque masterpiece consists of 27 movements, in 4 parts. It is a technically astounding and emotive piece that will have audiences reaching the highs of enchantment and the lows of melancholy, as the music lifts and descends on a melodic journey.

Due to its the complicated nature, Bach’s Mass in B Minor is rarely performed live and this performance in Halifax is the only opportunity to enjoy Bach’s last composition in the North of England this year, meaning that fans of classical and choral music are in for a real treat.

Tickets for this show are available from £12. Purchase tickets online, www.victoriatheatre.co.uk, or by calling the Box Office on 01422 351158