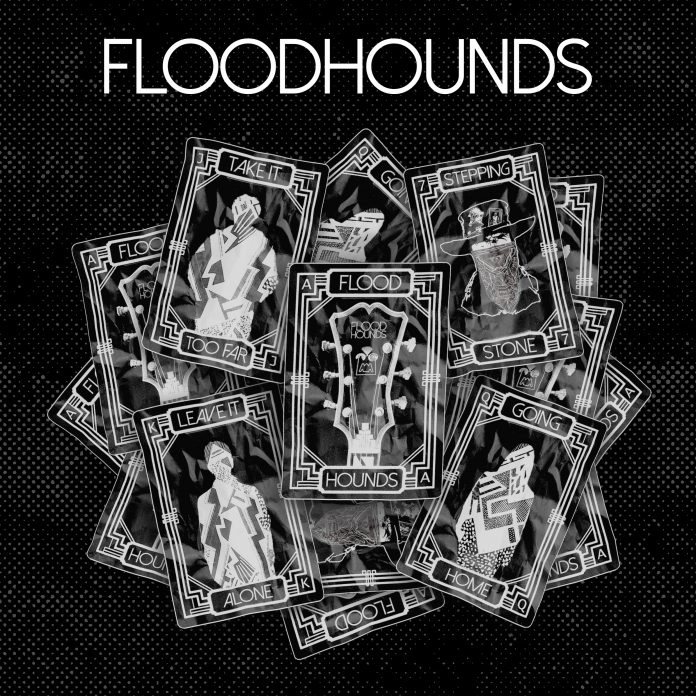 News of a new EP from FloodHounds was greeted with joy over her at LSF Towers. No, I’m understating that, it was actually greeted with a ‘Fuck yeah, more FloodHounds yummy-ness’. You may be assuming that I’ll somewhat of a fan of the band, and you’d be right.

Of the four tracks on the EP, two have been released as singles – ‘Take It Too Far’ and Stepping Stone – but there are two new tracks – ‘Leave It Alone’ and ‘Going Home’. The inclusion of the two previously released tracks is no bad thing, it really isn’t, I’ll get back to that.

In my review of ‘Take It Too Far’ I said that the track was ‘an instant ‘it’s got into my head, can’t get it out, don’t want it out of my head’ track, it sounds like one of those things you hear and you can’t quite believe you’ve never heard it before. It’s barely halfway in and you’re singing along at the top of your voice. This thing rocks people, it’s catchy, it’s really accomplished musically, it’s raw and at the same time smooth’. And I’m standing by that, I’m standing by that big time. And I still love that dreamy section.

My review of ‘Stepping Stone’ said ‘the track rocks, there are hints of a swampy blues-rock thing going on in there as well. In fact the start had me thinking ‘oh boy, FloodHounds have gone all old style blues rock’, that doesn’t last but somehow the contrast between the heavier bits and the lighter bits just makes this song. That and the fantastic drop out section with gentle guitar that gradually revs back up to something huge’. And again I’m standing by that.

But, and it’s a big but, what these two tracks doesn’t do is to quite prepare you for the other two songs. These show a degree of sophistication that I wasn’t quite ready for somehow, it was quite surprising, what little was left of my mind was totally blown.

For what these two tracks do is to take that FloodHounds’ bluesy slightly indie thing and add something of of a souly blues rock – I kept thinking Stevie Winwood – to make something so so so good. And it’s like FloodHounds but FloodHounds plus, the band stepping up a level.

And there is a progression in the four tracks, they hang together as a set of four, this makes having all four songs a must. Yep, you’re going to have perhaps one or two tracks as favourites but the four taken together are joyous.

‘Leave It Alone’ may strike you initially as being in the same vein as the first two tracks but it isn’t, OK so it is in some ways, but it isn’t in others. It comes with a hard bluesy stomp and swagger, and the entirely unexpected, but fabulous, stabs of swirly-ness. It is also a great song, the words of this thing are so good. I may be somewhat influenced by something of a personal experience here, but this is going to chime with a lot of us. And does Jack stretch out on this, his guitar completely rocks, but this is merely an appetiser for what is going to come next.

But it is with ‘Going Home’ that this EP reaches a climax. It sounds, well according to the friend I played this to, ‘like a cross between some Manchester band and Blind Faith but without the keyboards’. I’m not entirely sure this helps but at the start there is something of Manchester thing going on in Jack’s vocals.

The first time, and even second and third times, I listened to this song I left speechless, it’s that good. It’s beautiful and meaningful and it reaches deep down inside and twists your soul.

Look, if you have only one of the previously tracks, or even both, it’s worth listening to, and having to hand in your chosen download software or streaming service, for the four tracks taken as a whole have way more impact than the tracks taken individually. In fact the whole EP is a beautiful thing, it’s glorious and gorgeous.

And if you’re not somebody who’s into what FloodHounds do, then this, I’d suggest, is something that you need to listen to, must listen to.