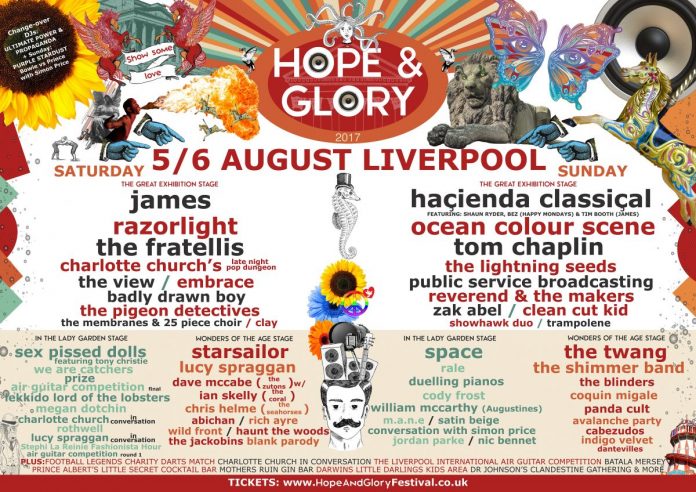 The festival will be held on 5th and 6th August in Liverpool. The complete line-up across all three stages has now been revealed with some special new additions including Liverpool’s very own Space, plus Rale, Rich Ayre, We Are Catchers and the ferocious Sex Pissed Dolls, who will have the legendary Tony Christie guesting with them for a special rendition of ‘Amarillo’.

They will be joining the festival’s incredible line-up of top name acts – including headliners JAMES and HAÇIENDA ÇLASSICAL, Razorlight, Ocean Colour Scene, The Fratellis, Charlotte Church’s Late Night Pop Dungeon, The Lightning Seeds and more, plus some of the most exciting up and coming talent such as the Blinders, The Shimmer Band and Zak Abel. Anthems loaded Embrace will also perform at HOPE & GLORY having just supported Coldplay, playing to 65,000 people a night at their recent stadium shows.

Also featuring on Saturday at the ‘In The Lady Garden Stage’ will be Charlotte Church and Lucy Spraggan ‘In Conversation With’ respected journalist and author Simon Price, as well as Liverpool’s International Air Guitar Competition, which will be taking place throughout the day, with entrants battling it out to show their best moves to the crowd. Entries for the Air Guitar Competition should be made to hello@tinyCOW.co.uk with their name, age and top three songs to rock out to.

On Sunday there will be exclusive acoustic performances from ex-Augustines frontman William McCarthy, who makes his return to Liverpool after his former band played their final show in the city last year, as well as The Voice UK 2016 contestant Cody Frost and an appearance from the grand ‘Duelling Pianos’ who will take to the stage in a thrilling contest between virtuoso ivory ticklers in a life or death struggle to showcase their skills!