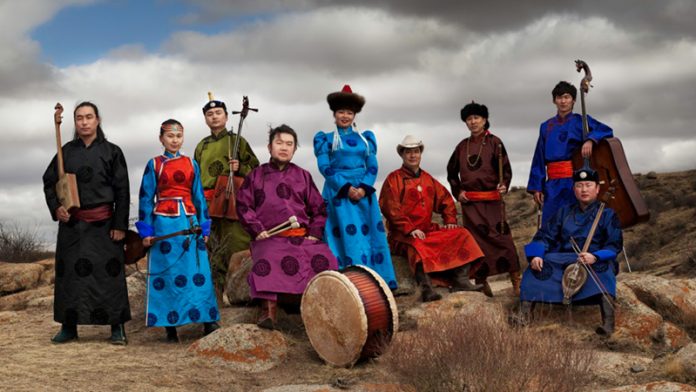 I jumped at the chance of reviewing this acoustic performance from Mongolian group AnDa Union – not because I had seen them before and liked them but because it was something different. I believe this is something we should all do from time to time – push our musical boundaries. And all in all it turned out to be a very interesting and memorable experience

AnDa Union come from Inner Mongolia but combine different traditions and styles of music from all over Inner and Outer Mongolia. The nine members of AnDa Union use vocal styles found in Mongolian songs and play traditional Mongolian instruments – including the Horsehead Fiddle. If you are interested in seeing more information about Mongolian music then you can visit this page.

Before going to see them I discovered that AnDa Union usually play mic’ed up and their music is, as a result, a lot louder and has higher energy. This acoustic concert presents some of the songs in what is probably a more traditional arrangement and sound.

After a brief introduction when we learn that AnDa means blood brothers – although given that two of the members of the band are women, I assume AnDa is non-gender specific – and that it’s a special performance as it’s taking place on Mongolian New Year, the band play their first song.

This is wonderfully surprising stuff, and my first introduction to throat singing. It starts with a slow section and then shifts into a faster section and then back to a slow section. The key thing in their music is the layers of sound produced by the various types of stringed instruments, the percussion, flute and voices. While the sounds some of these instruments produce may be unusual to our ears, the music is easily accessible. The fast section of this song has a driving rhythm and I could quite imagine dancing to it in a more informal venue.

Throat singing by the way sounds as though it’s actually quite painful for the person doing it. The fact that they can harmonise with themselves and circular breath is amazing. To hear it live was a real thrill.

What I can’t work is how to describe what this music sounds like to you. Fortunately I don’t need to, I can get you to listen to the video below (which is actually of one the later songs in the set). This isn’t acoustic but it’ll give you an idea.

The next song is about drinking and focuses on the band members’ voices. There’s just a lovely sweet interplay of vocals.

And so to our first horse related song – there will be others – this one about horsemen. For this we have our first introduction to a new singer. He doesn’t exactly dance but sways while singing. I, and the person sitting next to me, thought this song sounded like the theme to a spaghetti western in places.

The next song is introduced as being “about missing the grassland” – this is a deceptively simple song which was just achingly beautiful. I don’t understand the words but I don’t need to, the emotion comes through so very strongly.

After this song I’m afraid to say that my note taking became a bit, well, patchy. I was just carried away with the music. So you’re just going to get highlights of the rest of the concert.

A piece that was simply layers of throat singing, thrilled the audience. The depth of sound that the group can produce with this is incredible. And there was a solo piece by the flute player which was quite extraordinary – where he both played flute and throat sang.

Towards the end of the concert a song about one of the member’s home town was introduced. This was very much one of the stand-outs of the concert for me and I’m going to give you the opportunity to actually listen to this song.

Wasn’t that just wonderful? The acoustic arrangement the band played on the night was so moving.

The band encore with another horse related song called – I think – ‘10,000 Galloping Horses’. This starts with a slower section that evokes the sound of horses and then moves into a fast section which is frankly a bit of freakout. You can find videos of the band playing this live on YouTube.

Before leaving the stage the band get us to say Happy New Year in Mongolian which they video. This may appear on their Facebook Page if it worked out.

Before I end this review I’m going to have a bit of a rant. And I make no apology. My guess is that you might consider seeing AnDa Union if you are a fan of ‘World Music’. Well for me this is folk music, or even just music, and it’s bloody brilliant music, Does it matter that we don’t understand the words of the songs? Not a bit when the emotion and feeling in the music is there and it’s played so well. So this is music for fans of good music, not just for fans of ‘World Music’. Rant over.

Go see this band if they are in your area. You’ll be glad you did.