It’s been a long time since I reviewed a release by Sunflower Thieves but the wait has been worth it. This is another song that sits in the same sonic space as the last release I reviewed – ‘Hide And Seek’ – a dreamy pop song with a hint of folk.

Although the first thing you’re going to notice is their voices – and I’m going to be coming back to that in a bit – let’s first take some time to focus on the sound of this. The arrangement is not quite as simple as it may sound. There are washes of synth that weave and waft in a dreamy way through the sing, or perhaps float would be a better way of describing it. Their voices are supported by sounds that follow their vocal phrasing. A guitar is heard somewhere in the background. A sparse rhythm track clicks in a way that sounds almost random but isn’t, very definitely isn’t. And although it may sound as though I’m describing something that has produced to a point of soullessness, this is not the case; the arrangement and production serve to magnify and support the emotional feel of the song, not overwhelm it.

But it is their voices that take centre stage. Layers and layers of lush, beguiling, compelling voices. They tell us that the vocals are double tracked but it sounds like more than that. Those voices wash over you, enfold you, hold you in a safe and serene place. And this is what the song is about, they say “‘Don’t Mind The Weather’ translates as, ‘don’t worry, this is where you’re grounded and safe’, a tale of wanting to make the most of that feeling and stay inside. The message conveyed is that no matter how the seasons and weather may change, the gravitational pull of the moon – the person you feel safe with – will keep you grounded and safe. We based it on the moon’s relationship with the tides, and the idea that it’s easy to get swept away in everything that’s going on, but that there’s beauty in that, and the relationship with this person overcomes it all anyway.”

This, like their other songs, is a gem, a gem that has been carefully crafted. And like a gem it is to be treasured. It’s so incredibly beautiful. It’s words, voices and music in perfect harmony.

You can buy this on vinyl from Come Play With Me – where it is paired with ‘Vulnerable’ by LENU https://cpwm.awesomedistro.com/products/691154-cpwm019-sunflower-thieves-dont-mind-the-weather-lenu-vulnerable-ecomix-vinyl 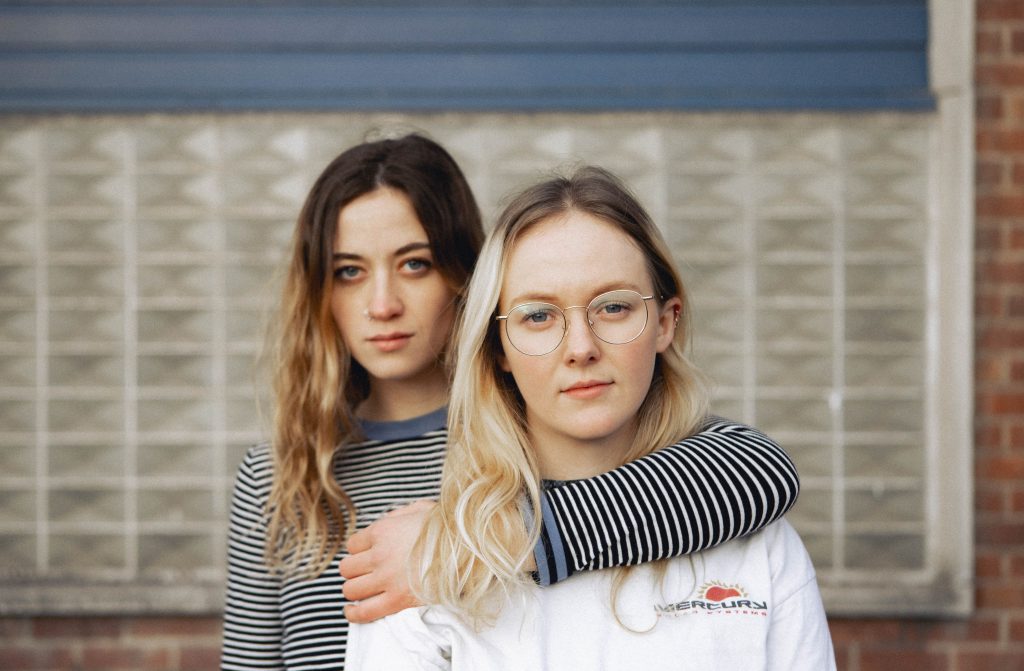 Amy and Lily have written and performed together for many years. Originally from Derbyshire, they relocated to Leeds, to pursue their musical ambitions. The Sunflower Thieves project has grown organically, into not only a live act, but also a songwriting and production collective, making the best of the Covid-19 restrictions by hosting remote songwriting sessions, with a diverse range of both new and established artists, including the likes of Benjamin Francis Leftwich.

The idea for ‘Don’t Mind The Weather’, conceived in early 2020 in the comfort of Lily’s home studio, was written in collaboration with fellow Leeds artist and friend, Mehalah Ray. Originally a simple acoustic composition, the track quickly blossomed, with Lily’s unique production finding an exciting new direction for the song.