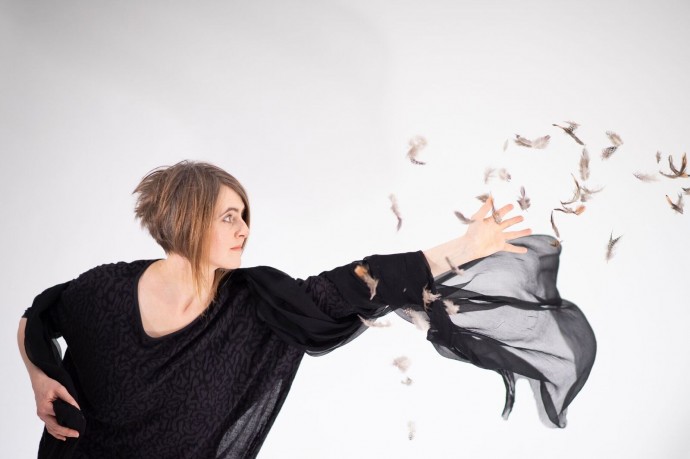 Multi-award winning songwriter and musician, theatre maker and published writer KARINE POLWART – six-time winner at the BBC Radio 2 Folk Awards, including 2018 Folk Singer of The Year – will release a new album, Laws of Motion, on October 19, 2018 via Hudson Records.

Polwart’s seventh release, Laws of Motion is the follow-up to 2017’s much-praised A Pocket of Wind Resistance, which earned Karine & co-writer Pippa Murphy a New Music Scotland Award for its innovative blend of folk music, spoken word & sound design, alongside a nomination for the Radio 2 Folk Album of The Year. The new album – recorded alongside long-term collaborators Inge Thomson (accordion) and brother Steven Polwart (guitars) – will arrive amidst a 13 date UK tour, including London’s Cadogan Hall on October 17, 2018.

A Pocket Of Wind Resistance used the migratory habits of geese to crack open universally human societal & ecological issues. Here, across Laws of Motion, Polwart coalesces the familial and the familiar effortlessly alongside the foreign, the frightening and the unknown, driven as ever by her gift for empathy and accessibility. Subject matter as disparate as Trump, WW2 & holocaust survivors are drawn together by the laws of the album’s title alongside the experiences of Japanese migrants and allegorical folk & children’s stories. Speaking about the album’s broad focus, Polwart says; “I didn’t set out to write songs on a unified theme – they’ve just landed that way. Perhaps that’s no surprise, given the times we’re in.”

Laws of Motion features amongst its track-listing a clutch songs which Polwart originally wrote with her friend (and Midlothian neighbour) Martin Green, of visionary folk trio Lau. Affecting ‘Suitcase’ and the smouldering, stirring album title track (which Polwart dedicates here to the UNESCO Chair of Refugee Integration Through Language & The Arts) were both recorded in different iterations (with vocals contributed by Becky Unthank and Aidan Moffatt) for Green’s 2016 multi-media project on social migration, ‘Flit’. The quietly urgent ‘Suitcase’ was written by Polwart as testament to all who used – and sustained – the Kindertransport, the underground network which smuggled mostly Jewish children out of Nazi Europe in the run up to WW2. Noting the track’s relevance to our present as well as the past, Polwart adds; “It’s also dedicated to all those who flee still, because they have to.”

Karine is at the height of her story-telling powers at the album’s vivid centre-piece, ‘Matsuo’s Welcome To Muckhart’, which articulates the stranger-than-fiction tale of the famous Japanese garden which has endured at the Clackmannashire home of global traveller & writer Isabella Christie since 1907. The garden was tended by a Japanese man called Shinzaburo Matsuo, who sailed 5,000 miles to Christie’s remote Scottish home, having lost his own family in Japan’s Great Earthquake of 1923. Written again in collaboration with Martin Green, Karine wrote the transportive track when the story was brought to her attention by staff & children at the local primary school, with whom she was working on a community project. It’s the kind of dignifying of loss, resilience and hidden history in which Polwart revels.

Laws of Motion nods towards the spoken word elements of Wind Resistance on the powerful ‘I Burn But I am Not Consumed’, and album-closer ‘Cassiopeia’. The former takes the clan motto of Donald Trump’s maternal Scottish family as its title, deflating the POTUS’s blustery posturing in the process. In an age with no shortage of artists taking aim at The White House’s incumbent, Polwart is presumably the first – and perhaps the only – to do so via the voice of the ancient rock beneath the Isle of Lewis, birthplace of Trump’s mother, Mary Ann Macleod. It’s anything but twee – lamenting a wayward island son, “a broken boy”, Polwart skewers Trump’s narcissism with both precision and humour (“In the name of progress, profit and executive golf / He would pit himself against time & tide”), whilst retaining the vestiges of his humanity.

The album comes to a spine-tingling close with ‘Cassiopeia’, in which the unimaginable concept of nuclear warfare rubs uncomfortably against a young Karine’s fearful grasp of the wider world beyond her childhood perimeters – “When the siren sounds above the BP at Grangemouth / We’re gonna hide in the jam cupboard”. The track intersperses snippets from the Protect and Survive radio broadcasts issued by the Home Office during the Cold War with the fearful, unanswerable questions of a 9 year old – “How far is it from Leningrad to Bonnybridge?” – all delivered in the richly evocative speaking voice which gives Polwart’s music so much of its warmth.

Laws of Motion is the latest in an evolving series of collaborative projects across which Polwart has combined music & storytelling with politics & environmental-societal issues. Karine wrote A Pocket Of Wind Resistance (a Songlines & BBC Radio 3 Late Junction Album Of The Year as well as SAY Award short listed) as a musical companion to her critically acclaimed theatre debut Wind Resistance, now published via Faber & Faber and selected by Robert McFarlane as a Guardian Book of 2017. The production, which debuted at the Edinburgh International Festival with a residency at the Lyceum, was written, musically directed and performed by Polwart, winning her the Best Music and Sound Award at the 2017 CATS. Alongside three other nominations, it also placed Polwart on the shortlist for the Best Actor ‘Scottish Oscar’ in the Sunday Herald Culture Awards.